The H.P. Lovecraft Wiki
Register
Don't have an account?
Sign In
Advertisement
in: Articles including information from the Mythos Influenced Works, Species Originating From Mythos-Inspired Works, Extra-Dimensional Species,
and 2 more

🐙 The Aboleths are an aberrant race from the fictional universes in Dungeons & Dragons and the Pathfinder pencil-and-paper roleplaying games.

The Aboleths are fish-like amphibious aberrations whom reside in the desolate waters of the Far Realms and the dark depths of the Underdark. Whose form resembles that of a mutated 20-40 ft long eel. Possessing a horrifying lamprey-like mouth and several tentacles near its head. Whose bodies are constantly exuding (rewrite) a slimy mucus, without which they cannot breathe. On land, they will quickly dry up, entering a state of suspended animation, and form a tough waterproof membrane.

Possess incredible psionic abilities, which gives them the ability to manipulate and control lesser beings. They are nearly immortal, as neither disease or age kills them, though they can still be killed. It's mucous has a horrifying effect on land-dwellers, turning their skin into a water-breathing membrane and their consciousness into a mindless servant. Aboleths also had perfect racial memory, with each member inheriting the memories of all its ancestors. In addition the memories of those they consumed were assimilated. Spending their time in the memories of their ancestors, was a favorite pastime.

Originally they came from the Far Realm, though a long time ago many of them migrated to the Prime Material plane, setting in the Underdark. Most of Toril's aboleths reside in the Underdark, though some of them are found elsewhere, usually at old temples, deep lakes, or ruins. Some of them are served by the kuo-toa. Their cities are full of strange and weird architecture, and are mostly located deep underwater. The largest known city is the Shape of Water, the main residence of their race's leaders and where they hold council. Which is located in the Glimmersea, in the Underdark.

Xxiphu is the flying city of the Aboleth. Home of the Abolethic Sovereignty which is ruled by the Eldest, a massive Aboleth of incalculable age and incomprehensible malevolence. The city originated in the Far Realm and arrived on Abeir-Toril when the world was young. When the sundering split it into two worlds, Abeir and Toril, the city ended up in Abeir. It was later transported to Toril during the Spellplague. It's inhabitants were at first attacked by the startled Aboleth of Toril. Now they live in uneasy peace with each other, though those of Toril avoid the city. The city itself is an colossal obelsik which has tentacles stretching from its walls, an eternal storm wrapped around it, and glyph inscriptions which depict thousands of constantly changing images. Any mortal mind that can comprehend the full meaning of those inscriptions would go insane. Xxiphu alters reality in its vicinity, periodically spawning Far Realm aberrations into the Prime Material Realm.

The Aboleths (species true name alghollthu) originated in an alien world. A cataclysm in the sky is what awakened their race, the first experience in their cellular memory. They sensed other lifeforms nearby, but discovered they were the only intelligent lifeforms. As the evolved as a species and society, they learned to consume life, control life, etc. They developed four Dictums which their race follows. Which are that all life existed to be controlled, Aboleths are to control, they are eternal as many and one, and overreaching threatens the eternal.

On their homeworld, they created a global empire in which for millennia they ruled over lesser lifeforms. Until disaster struck in an uprising by their slaves. In the war of attrition, the rebels lost millions, but the Aboleths eventually lost, forcing the few thousand survivors to flee underground. The greatest among them were chosen to merge, becoming their first veiled masters. For decades the veiled masters studied and mastered glyph magic. Meanwhile the rebels continued their push underground, and within 80 years only a few dozen veiled masters and less than a 1000 Aboleths remained. They created a number of portals to other habitable planets, and most of the veiled masters left for those worlds to establish new colonies, with a few score Aboleths escorting each of them. Only one veiled master stayed behind, and when the rebels arrived, it activated a glyph which destroyed the world.

The ones that arrived on Golarion, established their dominance over its oceans during the Age of Legend. The land at that time was dominated by the four armed, insectoid humanoid xiomorns. They went to war with each other, a war that the aboleths won. Their Veiled Masters then used illusion magic to walk among humans. They shaped the course of human history, giving rise to the Empire of Azlant. Through it, they expanded their power, establishing a global empire. As time went on the Azlanti discovered their manipulations and despite the efforts of the Aboleth (e.g. assassinations), they became a threat.

In an attempt to obliterate the humans the Aboleth reached into outer space and pulled a meteorite toward Golarion, the Starstone. The goddess of the Azlanti had a moon intercept the meteorite which then shattered into millions of pieces which bombarded the world. The Aboleth badly miscalculated the destructive power of the Starstone. It not only annihilated the continent of Azlant and destroyed or crippled every other land-based civilization but it severely impacted their own civilization, bringing about the Age of Darkness. Though most of the Aboleths survived, they were forced into slumber.

Aboleths are able to mold and create new creatures to serve them as slave races. In fact many of Golarion's races were originally creations of the Aboleths including the Cloakers, the Skum, the Ceratiodi, the Faceless Stalkers, and its theorized by some, the Shoggoth. When the island continent of Azlant was obliterated by the Starstone, the Aboleths rescued some of its inhabitants and used their fleshwarping abilities to turn them into a slave race, the Gillmen. Due to the Aboleth's obsession with tyranny and slavery, the Prydanu Azatas violently oppose them and will often launch crusades of liberation against the Aboleths. 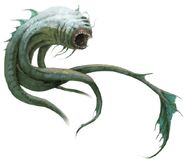 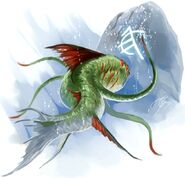 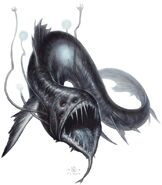