The Dweller in the Gulf (certain sects)
Vulthoom (offshoot sect)

CIRCLE: "The Dweller in the Gulf"

The Aihai are a species of alien which appear in the H.P. Lovecraft-inspired Cthulhu Mythos.

Aihai are tall creatures, measuring over six feet in height. They possess a tough, leathery hide, a triple-nostrilled nose, sunken eyes, twin sets of sharp teeth, four-jounted fingers, and satyr-like legs. Some are birthed with a vestigial, atavistic third arm which sprouts from their angular chest. Unlike their ancestors, the Yorhi, the Aihai are not proficient in the use of advanced machinery, although occasionally one can be found operating ancient technology beyond the capabilities of human science, such as disintegrator rays.

The Aihai inhabit a collection of subterranean cities on Mars, modest in terms of size and architectural scope. They are a largely peaceful race, and are for the most part quietly friendly to the humans who encounter them.

The Aihai are aware of the powerful alien known as Vulthoom which dwells in the subterranean city of Ravermos, and in the distant past fought a vicious war against it and it’s followers; in the modern age, they see it as something akin to the Christian Satan. Despite this, one radical sect of Aihai has fallen to the worship of this creature, due in no small part to its granting them virtual immortality through the drinking of a mysterious elixir

The Dweller in the Gulf

One particular sect of blind subterranean Aihai worship the ancient Martian being known as the Dweller in the Gulf, although they appear to be a minority group and conduct their practices in secret.

Background in Call of Cthulhu

The Aihai are a peaceful sentient race which is indigenous to Mars. Its society revolves around culture and trade. The typical Aihai stands about 10 ft tall and has a bulging chest and multiple many-angled arms. The race coexists uneasily with the warlike Martians and has as little to do with them as possible. Aihais live in subterranean cities though in the future they will built great and beautiful cities on the surface, once contact is made with humans. A faction resides in a great underground complex with their master, the Great Old One Vulthoom.

Aeons ago, when Vulthoom arrived on Mars, a civil war erupted between Vulthoom and his followers and the ruling Aihais. Vulthoom was defeated and it and its followers fled underground, where they slumbered in suspended animation for centuries. Now they build spacecraft to carry Vulthoom and its followers across the cosmos to conquer new worlds, with Earth being the first target. Among the weapons its followers possess are disintegrator guns capable of melting rock and metal and instantly dissolving organic matter. 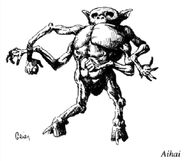 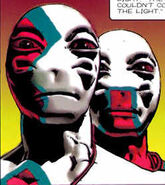