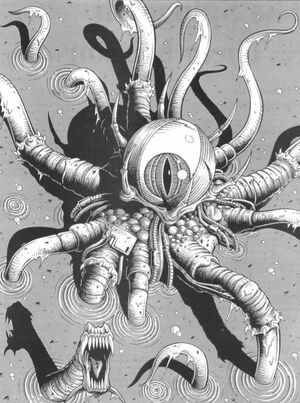 🐙 Alien Intelligences are eldritch extra-dimensional beings from the fictional universe of the Rifts pencil-and-paper roleplaying game by Palladium.

Alien Intelligences are monstrous supernatural beings that are evil incarnate. Which are theorized as being related in one form or another to the Old Ones. They come in a wide variety of forms, but the majority have bodies consisting of fleshy pulsating mounds with slimy tentacles.

Many of them are gargantuan monstrosities, the largest being as massive as skyscrapers. They may straddle dimensions, sending shards of their lifeforce into worlds to spread hate, murder, fear, and madness. Which can possess sentient beings, creating monstrous or beautiful avatars which are as powerful as demigods.