🐙 The Anti-Spirals are an eldritch cosmic race in the fictional universe of the Gurren Lagann manga and anime.

The Anti-Spirals are a mysterious humanoid race who have made it their purpose to prevent the emergence of the Spiral Nemesis. This is a theoretical apocalypse brought about by the overuse of Spiral Power. The Anti-Spirals theorized that once enough Spiral Power is generated, all of the universe's Spiral lifeforms would begin to evolve into galaxies. Due to the sudden imbalance of mass in the cosmos, these mega-galaxies would devour each other, resulting in a black hole that would consume all of reality.

Therefore the Anti-Spirals purged themselves of Spiral Power and put themselves in a state of suspended animation. Their collective consciousness then took form as the Anti-Spiral, whose sole mission is the purging of Spiral beings from the universe. The Anti-Spiral is omnipresent, omniscient, and nigh-omnipotent. It is able to appear anywhere in space-time, replicate Spiral lifeform abilities, and produce combat mecha, including incomprehensibly godlike ones the size of a galaxy or larger. The Anti-Spiral can create and destroy both universes and multiverses. In battle, they've torn holes through galaxies and across multiple dimensions. Anti-Spirals are able to alter probability and create matter out of nowhere that eclipses universes. They can also bring people back from the dead, and alter both their personalities and memories. Able to create a multiverse with 1000s of universes and move between dimensions.

The only conceivable link to the Mythos of these stories is that the Anti-Spiral is on the same sort of power level as Azathoth. 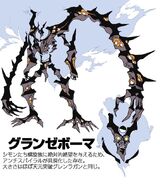