The H.P. Lovecraft Wiki
Register
Don't have an account?
Sign In
Advertisement
in: Articles including information from the Expanded Cthulhu Mythos, Great Old Ones, Characters Originating From Expanded Mythos Works
English

EXP: "The Acolyte of the Flame"

Aphoom-Zhah (The Cold Flame) is a Great Old One that appears similar to Cthugha but cold and grey.

Aphoom-Zhah was spawned by Cthugha during his visit to Hyperborea. There, Aphoom-Zhah was worshipped as a god. This put him in direct competition with other polar gods, Rhan-Tegoth and Rlim Shaikorth, which began to dispute with him for devotees.

This situation remained stable for some time until the Elder Gods arrived to destroy them. Rhan-Tegoth was sunk in a comatose state and Rlim Shaikorth was thrown to the sea aboard an iceberg. However, when they were about to apprehend Aphoom-Zhah, it reacted with such violence that it froze the regions of Hyperborea, Lomar and Zobna, giving rise to the North Pole.

This history is collected in the Pnakotic Manuscripts. 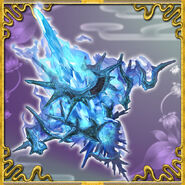