HPL: "The Picture in the House"

Arkham is a fictional city set in the US state of Massachusetts, and makes up a key part of the Lovecraft Country setting.

Arkham's most notable characteristics are its gambrel roofs and the dark legends that have surrounded the city for centuries. The disappearance of children (presumably murdered in ritual sacrifices) at May Eve and other "bad doings" are accepted as a part of life for the poorer citizens of the city.

The city is home to Miskatonic University, the Arkham Historical Society and Arkham Sanitarium. It is said in that the town was devastated by a typhoid outbreak in 1905. (HPL: "Herbert West--Reanimator")

The precise location of Arkham is unspecified, although it is probably near both Innsmouth and Dunwich. However, it may be surmised from Lovecraft's stories that it is some distance to the north of Boston, probably in Essex County, Massachusetts.

The actual location of Arkham is a subject of debate. Will Murray places Arkham in central Massachusetts and suggests that it is based on the small village of Oakham. Robert D. Marten rejects this claim and equates Arkham with Salem, and thinks that Arkham is named for Arkwright, Rhode Island (which is now part of Fiskville).

A more recent mapping of Lovecraft Country reinforces this suggestion, with Arkham being situated close to the location of Gordon College; in Lovecraft's work this would presumably be replaced by Miskatonic University itself. The real-life model for Arkham seems to be, in fact, Salem, its reputation for the occult appealing to one who dabbles in the weird tale. August Derleth stated in his writings: "Arkham ... was Lovecraft’s own well-known, widely used place-name for legend-haunted Salem, Massachusetts, in his remarkable fiction". (AWD: "About Arkham House" web site)

One of the ships used by the Miskatonic University expedition was named Arkham after the city. (HPL: At the Mountains of Madness)

Note: dates are the year written. Arkham has appeared in the Cthulhu Mythos tales of other writers since Lovecraft's death. Among them:

Arkham House, a publishing company started by two of Lovecraft's correspondents, August Derleth and Donald Wandrei, takes its name from this city as a tribute.[2] 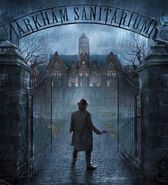