Arkham Horror is a series of board games based in the universe of the Cthulhu Mythos whose first edition was published by Chaosium, with subsequent editions being developed and released by Fantasy Flight Games.

While actual gameplay varies wildly from edition to edition, all versions of the game involve a group of up to six players each taking control of one or more characters whose mission is to destroy roaming monsters and close inter-dimensional portals. These events take place within the city of Arkham with the base games, and as of the Second Edition throughout other famous locations from the Mythos via the purchasing of certain expansion sets.

The original Chaosium edition of the game was designed by Richard Launius and had a production run from 1987 until 1991. Each player selects a pre-made character from a deck and must travel the streets of Arkham, visiting notable places from the Mythos while closing inter-dimensional portals which spew out a variety of creatures featured in the works of H.P. Lovecraft. Victory is achieved by closing all active portals on the board before a certain number of portals have opened. Should the players fail to do this, then the game automatically ends in defeat.

The Second Edition of Arkham Horror, first released in 2005, saw the publisher changing from Chaosium to Fantasy Flight Games, and while it retained many of the features of the original, was given a fairly major overhaul by games designer Kevin Wilson. Most notable of the changes was the introduction of Great Old Ones as antagonists which must be fought if the players are unable to close all of the portals before a pre-determined series of events leads to their awakening.

This edition also saw the release of several expansion sets, a handful of which contained additional boards which allow the players to travel to other locations of note such as Dunwich and Innsmouth, along with more Investigators, Monsters, Equipment, Spells and Great Old Ones to choose from. Each expansion typically introduced a new mechanic which changed the way the game was played in some way or other.

The 2018 edition of Arkham Horror marks a fairly radical departure for the franchise, being the first to feature modular boards and branching decision trees. A series of expansion sets are planned for release from the second half of 2019 onwards.

In addition to their two releases of Arkham Horror, Fantasy Flight Games has produced several games based on the core product, including board games, Living Card Games, and novels. These are all published under their Arkham Horror Files label. Board- and card-games include: Elder Sign, Eldritch Horror, Arkham Horror: The Card Game, Final Hour; the stories are collected in Arkham Horror Fiction. 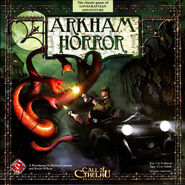 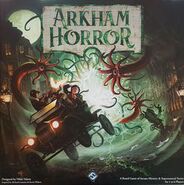 Third Edition box art.
Add a photo to this gallery
This article is a stub. You can help the The H.P. Lovecraft Wiki by expanding it.
Retrieved from "https://lovecraft.fandom.com/wiki/Arkham_Horror?oldid=34495"
Community content is available under CC-BY-SA unless otherwise noted.