HPL: "The Thing on the Doorstep"

Asenath Waite is a character created by H. P. Lovecraft for his short story "The Thing on the Doorstep".

She was born in 1905 to Ephraim Waite and an unnamed mother who "always went veiled." A native of Innsmouth, Asenath's home was generally avoided due to the boarded attic windows and "strange sounds sometimes floated from within as evening drew on."

After the "death" of her father, Ephraim, Asenath attended the all-girls school, Hall School, in Kingsport. She later enrolled in Miskatonic University - becoming the only known female student to attend the institution - where she studied medieval metaphysics. It is at university, during a gathering in the student rooms, where she met Edward Pickman Derby, who became almost instantaneously infatuated with her. They soon married and purchased a house in Arkham, Asenath brought with her three unpleasant servants from her home in Innsmouth and a hoard of ancient tomes and books.

Years pass, and it is noted that Asenath ages incredibly, producing "premature crow's feet". Less and less is seen of both Asenath and her husband throughout this time. Edward tells of strange stories about Asenath and her father:

It is during their marriage that Asenath attempts to exploit her husband's weak will by "exchanging personality". After apparent months of mental abuse at the hands of Asenath, Edward finishes their relationship after but a few years of marriage. Edward dismisses her servants and burns most of her books, including her copy of the Necronomicon.

Asenath is eventually "killed" by her husband after he "smashed her head in" with a candlestick. However, Asenath's presence still lingers, even after Edward buries her body beneath a mound of boxes in the cellar, and Asenath eventually succeeds in "exchanging" with her husband - transferring her spiritual essence into his body, and vice versa. However, her husband was admitted to the Arkham Sanitarium and thus, Asenath was confined to a cell there. She manages to persuade those at the Sanitarium that Edward's "reason has suddenly come back," however, she is unsuccessful in persuading his best friend, Daniel Upton - who sees that it is not Edward's true personality.

At his friend's request, Daniel Upton went to the Arkham Sanitarium and shot Edward Pickman Derby - effectively killing Asenath and cremating the remains.

According to one account, she is the alter ego of Elspeth Waide created by Howard Phillips Lovecraft based on Robert Black's Commonplace Book. Elspeth is the daughter of Edgar Waide, and they were both possessed by an older ancestor whose first stolen body was Mathilde Roulet, presumably making this entity her husband Etienne Roulet. (EXP: Providence)

Asenath is "dark, smallish, and very good-looking except for her overprotuberant eyes".

Lovecraft also writes of her remarkable abilities, posing as a magician of sorts in school. Asenath is able to conjure thunderstorms - though this is seldom believed by others, who usually laid it to an uncanny knack at prediction. Asenath is also detested by animals, being able to " make any dog howl by certain motions of her right hand." Additionally, she is renown around Miskatonic University for being a hypnotist of sorts,

It is heavily implied that Asenath is a Deep One hybrid, due to her Innsmouth heritage and "overprotuberent eyes" - a trait that is generally attributed to "The Innsmouth Look".

Asenath Waite is one of only few prominent female characters within Lovecraft's stories (Lavinia Whateley being another central character featured in Lovecraft's writings).

However, the general consensus is that throughout the short story, Asenath is really Ephraim who is possessing her body. It is stated that: "Her crowning rage, however, was that she was not a man; since she believed a male brain had certain unique and far-reaching cosmic powers," suggesting that Ephraim is enraged by the fact he is confined to his daughter's body - which gives reason for her predatory conduct towards her husband, Edward Pickman Derby.

It is later mentioned in the story about Ephraim's disgust in being trapped within a female body:

Peter Cannon writes that The Thing on the Doorstep is "the only Lovecraft story with a strong or important female character," however this is contradicted by the tale's "gender-swapping situation." 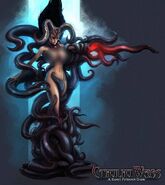