Atlach-Nacha resembles a giant spider with an anthropomorphic face capable of some human expression. It dwells in a cave system beneath Mount Voormithadreth, in the now extinct Arctic kingdom of Hyperborea. There, it spins a great web, bridging the many caverns of the underworld together. In its original appearance in the short story "The Seven Geases", Atlach-Nacha dwells between the lairs of Tsathoggua and the antehuman sorcerer Haon-Dor.

According to later Chaosium material, this web is a bridge between the Dreamlands and the waking world. It is believed that when the web is complete, the end of the world will come.

According to the fiction of Lin Carter, it is served by the "Grey Weavers". A burial ritual in the Book of Eibon references this god. 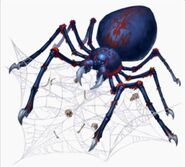 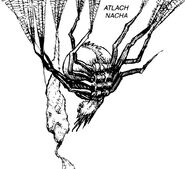 Add a photo to this gallery
Retrieved from "https://lovecraft.fandom.com/wiki/Atlach-Nacha?oldid=36683"
Community content is available under CC-BY-SA unless otherwise noted.