The H.P. Lovecraft Wiki
Register
Don't have an account?
Sign In
in: Articles including information from the "Lovecraft Circle" Myth Cycles, Characters, Outer Gods,
and 3 more
English

🔀 This is an article about the character. For the story fragment, see "Azathoth (short story)"

🎨 Azathoth, sometimes called "The Blind Idiot God", the "Nuclear Chaos", the "Daemon Sultan", "The Deep Dark", and "The Cold One", is an Outer God.

There can be no definite description of Azathoth because everybody envisions him differently and he is always changing.

According to some accounts, it is a huge sentient black hole. (EXP: Russell's Guide to Interdimensional Entities)

There is evidence the physical manifestation of Azathoth in the universe is continuous with a spot in the central region of the galaxy, otherwise known as Sagittarius A* - the supermassive black hole at the center of the Milky Way galaxy. (source needed)

For example Ronald Shea enters a temple after visiting the forest near Goatswood and discovers a twenty-foot idol that "represented the god Azathoth--Azathoth as he had been before his exile. Outside, It consisted of a bivalvular shell supported on many pairs of flexible legs. From the half-open shell rose several jointed cylinders, tipped with polypous appendages; and in the darkness inside the shell I thought I saw a horrible bestial, mouthless face, with deep-sunk eyes and covered with glistening black hair." (EXP: "The Insects from Shaggai")

Later Shae sees "something ooze into the corridor--a pale grey shape, expanding and crinkling, which glistened and shook gelatinously as still-moving particles dropped free; but it was only a glimpse". (EXP: "The Insects from Shaggai")

Azathoth is a significant malign presence In the Necronomicon as both Albert Wilmarth (HPL: "The Whisperer in Darkness") and Walter Gilman (HPL: "The Dreams in the Witch House") are horrified at the mere mention of its name having both read about it in the occult tome.

In Gilman's case it's the witch Keziah Mason who references Azathoth while haunting his dreams telling him "He must meet The Black Man, and go with them all to the throne of Azathoth at the centre of ultimate Chaos.... He must sign in his own blood the book of Azathoth and take a new secret name.... What kept him from going with her...to the throne of Chaos where the thin flutes pipe mindlessly was the fact that he had seen the name 'Azathoth' in the Necronomicon, and knew it stood for a primal horror too horrible for description."

Gilman wakes from another dream remembering "the thin, monotonous piping of an unseen flute", and decides that "he had picked up that last conception from what he had read in the Necronomicon about the mindless entity Azathoth, which rules all time and space from a curiously environed black throne at the centre of Chaos."He later fears finding himself in the spiral black vortices of that ultimate void of Chaos wherein reigns the mindless daemon-sultan Azathoth" (HPL: "The Dreams in the Witch House").

The poet Edward Pickman Derby wrote a collection of "nightmare lyrics" called "Azathoth and Other Horrors." (HPL: The Thing on the Doorstep).

Among his many followers the worshippers in the town of Goatswood that practice "obscene rites" that involved "atrocities practiced on still-living victims" in Azathoth's conical temple are insects that have fled the destruction of their home planet of Shaggai, bringing the temple across the universe with them (EXP: "The Insects from Shaggai", Ramsey Campbell). 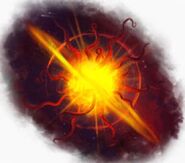 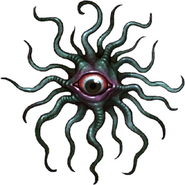 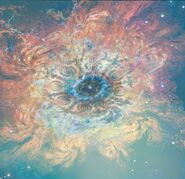 Azathoth, as it appears in Russell's Guide (merzo.net)