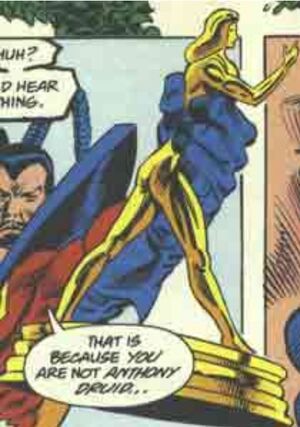 The Bride of Slorioth is a fictional item in the Marvel universe which first appeared in 1994 in issue 15 of volume one of the Secret Defenders comic series.

The Bride of Slorioth was a mystical statue which had some type of relationship with Slorioth, one of the Old Ones. Which permitted the ex-Avenger, Dr. Druid to transform Shadowoman's soul into a shadow-form, which had various superhuman abilities. Unknown to Dr. Druid, it also claimed a portion of his own soul, corrupting it into a dark soul.

Retrieved from "https://lovecraft.fandom.com/wiki/Bride_of_Slorioth?oldid=28916"
Community content is available under CC-BY-SA unless otherwise noted.