The Berkeley Toad
The Serpent-Bearded
The God of Forgetfulness

CIRCLE: "The Shambler from the Stars"

EXP: "The Room in the Castle", Ramsey Campbell

Byatis, The Berkeley Toad or the Serpent-Bearded Byatis appears as a gigantic, multicolored toad with a single eye, claws similar to a crabs and a beard of tentacles.

Byatis has been associated with "Yig" and "Han", as among the "gods of divination".

An 18th-century document relates that a statue of the creature. Later the document says the monster is "somewhat like a Spider, somewhat like a Crab, and somewhat like a Horror in Dreams." It reports that the "Romans found it behind a stone Door in a Camp which was here long before the Invasion."

The creature is depicted as incredibly large - one of its facial tentacles is as thick as a man - which makes it about the size of the castle that it is trapped beneath. Byatis can be repelled by the Elder Sign.

In ancient times, The idol of Byatis was brought down to earth by the Deep Ones. Some time later, under unknown circumstances, Byatis itself was sealed behind a stone door in what would later become the Severn Valley. Most likely, the Elder Gods were responsible. When the Romans conquered Britain, a small group of soldiers formed a cult to the god, which was annihilated upon Byatis' short-lived escape. Centuries later, a Norman castle was built over the spot where Byatis was trapped, near what would later become Berkeley and Severnford.

During the 18th century, Byatis came under the control of the warlock Sir Gilbert Morley, who trapped the monstrous creature in the dungeon of the castle, and used its powers to enhance his own. He fed it by setting it loose during the night to devour the townsfolk, then returned it to the castle and locked it away once more. However, with each living thing it ate, Byatis grew larger. Eventually, Byatis became too big for its prison, and finally trapped itself when it consumed its keeper. This event and the memory of the Great Old One's earlier escapes, developed into the legend of the Berkeley Toad.

In the Robert M. Price short story "The Beard of Byatis", the creature is capable of turning others to stone through the use of its facial tentacles and disguising itself as a human being.

Byatis was first mentioned in Robert Bloch's short story "The Shambler From the Stars", originally published in the September 1935 issue of Weird Tales. It plays a central role in Ramsey Campbell's 1964 short story "The Room in the Castle". 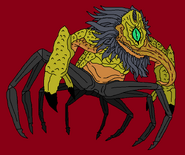