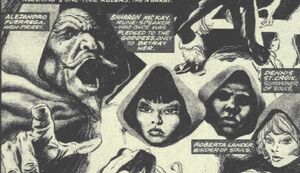 The Camarilla of the N'Garai is a fictional cult which appeared in the Marvel universe in 1976, first appearing in issue #4 of the 2nd volume of the Haunt of Horror in a prose story.

The Camarilla of the N'Garai are a group of humans who pledged their service to the N'Garai which was based in San Francisco. It's leader Jimmy Cruz was a monsignor within the Catholic Church who desired to destroy Satan and his forces. He was willing to use whatever means were necessary to accomplish that goal. Therefore turning to the N'Garai for power and their assistance. It's members summoned demons and both extracted and bound souls. They tried to kill Satana, the heroic rebellious daughter of Lucifer, only to die at her hands.

Retrieved from "https://lovecraft.fandom.com/wiki/Camarilla_of_the_N%27Garai?oldid=28985"
Community content is available under CC-BY-SA unless otherwise noted.