The H.P. Lovecraft Wiki
Register
Don't have an account?
Sign In
Advertisement
in: Articles including information from the Expanded Cthulhu Mythos, Locations Originating From Expanded Mythos Works, Dimensions

Cancerverse is a fictional universe in the Marvel Multiverse, one of the realities conquered by the Many-Angled Ones. It appeared in The Thanos Imperative mini-series in 2010.

In this reality, Death was defeated by Life. A dying Captain Mar-Vell was seduced by the Many-Angled Ones into making a pact with them, who cured him of his cancer. After convincing his closest allies and friends to join him, twisting and corrupting them, they killed Thanos, the Avatar of Death. As a result of that ritual which also destroyed that universe's cosmic aspect of Death Life itself became an Eldritch abomination. Without Death to keep Life in check, it absorbed everything that would otherwise have been destroyed or killed and it grew like a cancerous tumor.

This unnatural "eternal life" was fueled by the power of the Many-Angled Ones, and Lord Mar-Vel as the Cancerverse's Avatar of Life he was determined to spread the plague of undeath throughout the Multiverse. His first target was the Prime Reality (Earth-616) which he assaulted through a tear reality known as the Fault. They would have succeeded if not for the actions of 616's Thanos and the Guardians of the Galaxy who brought their universe's Death into the Cancerverse, temporarily weakening it and crippling the invasion. As the entity Death had to return to their reality, the Cancerverse was able to recover.

Gallery of the Cancerverse

Gallery of its Inhabitants 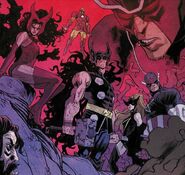 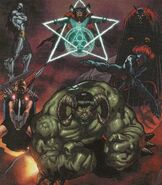 The Defenders of the Realm (corrupted Defenders) 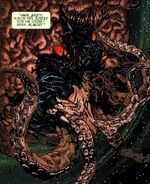