The H.P. Lovecraft Wiki
Register
Don't have an account?
Sign In
Advertisement
in: Articles needing citations, Articles including information from the Mythos Influenced Works, Species Originating From Mythos-Inspired Works,
and 3 more

🐙 The Celestials are an eldritch cosmic race of "space gods" in the fictional universe of Marvel by Marvel. Space gods which are neither benevolent or malevolent, whose agenda is unknown to mortals and even godlings. In that latter respect they not only resemble the Great Old Ones but in inexplicable motivation.

The Celestials are a race of giant space gods, beings of energy whom are encased in armor. A race of cosmic beings who create life and experiment on lifeforms, creating sub-species with superhuman powers. Mutant races which emerge from the manipulations have the potential to evolve and become Celestials themselves. They are tested by the Celestials via the use of the "Death Seed" which creates beings of death and destruction to test the mutant races (one of which is Apocalypse on Earth).

Celestial hosts arrive on these worlds millennia after their experiments to observe and if they deem the results unsatisfactory, they cleansed the world of the failure in a cataclysmic extermination or simply destroy the planet itself. Celestial implant eggs / embryos in the cores of many worlds, which take may take millennia to gestate. Once the Celestial emerges, the world is consumed, even if its still inhabited. Among the races they have manipulated are the shapeshifting reptilian humanoid Skrulls of the Andromeda Galaxy, the mammilian humanoid Kree of the Greater Magellanic Cloud, and the humans of Earth. 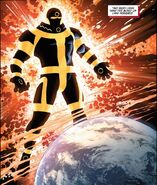 Celestial, prior to Earth's destruction

Gallery of their Agents