The H.P. Lovecraft Wiki
Register
Don't have an account?
Sign In
Advertisement
in: Articles including information from the Mythos Influenced Works, Alien Species, Species Originating From Mythos-Inspired Works, Sapient Species

🐙 The Ceph are an eldritch-like extra-galactic race and a cosmic horror element in the fictional universe of the Crysis video game.

The Ceph are cephalopod-like in form, which is the reason humans call them "Cephs" (Cephalopod). Pure-strain Cephs are approximately 2 meters long with a bluish/purple color. With five tentacles coming from the torso, several red eyes, and two arms. They required a special suit to survive on Earth. The human-derived strain of the Ceph have three tentacles coming from their back, vary in height, and are a pink or red color.

It's a race whose language is so far beyond human understanding that all mankind can do is speculate about the species and their motives. They possesses a billion-year old interstellar civilization. Which is organized into several vast over-hives. Each one consisting of countless ships, planets, and colonies. In the local group of galaxies, the Ceph dominate several galaxies. Completely controlling the Triangalum galaxy (M33, over 2.7 million light years away) and most of the Milky Way galaxy.

Their technology lets them adapt to any environment and most of them combat equipment consists of autonomous or semi-autonomous machines, usually using anti-gravity technology. Which are equipped with energy-based and ice-based weapons, and are able to drain energy from nearly any source that is in close proximity. Machines which are able to repair themselves. Ceph interstellar ships, range from the mountain-sized scout / seedling ship to the squid-like planetoid warship that was the size of a continent or moon.

The Ceph arrived on Earth over 65 million years, in several seeding ships. They were responsible for the mass-extinction event at the time, thereby ending the age of dinosaurs. Now they wage a genocidal war against humanity, the reason which remains a mystery to the human race. It's speculated that since they are so technologically advanced that they are virtually able to create anything that comes to mind, the only thing the Ceph are interested in is in what they are unable to think of, which is organisms and proteins that evolve over millions of years. Therefore the Ceph who have been stationed on Earth for millennia, periodically wake up on schedule to scout the world and collect scientific data. Acting as its gardeners, nurturing life and observing its evolution. The reason they are waging a war of extermination against mankind is the see them as pests or weeds in the "garden". 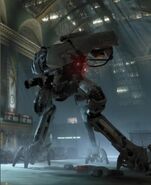