The Children of Abhoth are a fictional race created by Chaosium in 1995 for the Call of Cthulhu roleplaying game, which were based on Clark Ashton Smith's "The Seven Geases".

The Children of Abhoth are the creatures which sloughed off the Outer God's bulk. They are complex life forms, although some do not appear to be "finished", with vestigial limbs and half-formed bodies, while others seem fully realized. No two offspring are alike: they range in looks from prehistoric creatures to singular body parts, weird humanoids, monstrous mutants, unfinished bodies, amorphous blobs of living flesh, and so on. Most of them are simple-minded, reacting and acting on impulse, but a few seem to demonstrate intelligence and cunning. Therefore, their abilities are equally varied: depending on their bodies, they may fly, crawl, swim, run, or be immobile. Some of them are re-absorbed by Abhoth whilst some remain with their sire, tending to its needs. Those that scurry away to dark corners can mature into larger manifestations. A few eventually find the angles to be trasported to the the Dreamlands and other dimensions. 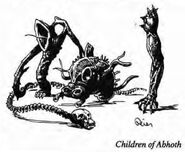