The H.P. Lovecraft Wiki
Register
Don't have an account?
Sign In
Advertisement
in: Articles including information from the Expanded Cthulhu Mythos, Sapient Species, Other Supernatural Beings,
and 2 more

HPL: "The Haunter of the Dark" (allusion)
EXP: "Cement Surroundings"

"Burrowers Beneath" is the title of Robert Blake's short story (HPL: "The Haunter of the Dark") which became the basis and inspiration for the Chthonians (/ˈθoʊniənz/; from Greek: chthon, "earth"). (EXP: The Burrowers Beneath). Chthonians were then an integral part of the expanded Cthulhu Mythos in works by other authors.

These powerful burrowers bear little resemblance to anything else on this planet and may be some diminutive form or splinter species of the terrible Dholes. Rarely seen, these entities live toward the Earth's core, with only a few individuals visiting the upper strata and outer crust. An exception to this rule is the mysterious city of G'harne, somewhere in Africa, which appears to be a sacred or important site, as those who allege to have found and visited G'harne tell of great gatherings of these beings, although such accounts may be just wild speculation. Chthonians use telepathy to communicate with others of their race anywhere in the world, sense human (and other) minds, and (when a full adult) telepathically control members of other species. They can tunnel through rock as though it were butter and do not require air to breathe. Adult Chthonians can withstand enormous temperatures, up to 4,000°C (7,000°F ). In addition, Chthonian adults can create powerful earthquakes.

Perhaps due to their alien composition or heritage, Chthonians are incredibly susceptible to water. While their slime coating protects from small amounts of water, general immersions destroy a Chthonian. While burrowing, these monsters appear to detect moisture and avoid large pockets or bodies of water.

Chthonian eggs resemble geodes or other spherical mineral formations. They are approximately one ft. (30 cm) in diameter and have shells 2 inches (5 cm) thick. Hatchlings are the initial stage of Chthonian growth and exist only for a few months after hatching. Out of their shells, each is the size of a larger than average earthworm and can withstand only 104°F (40°C); burning a cigar could wither and kill one.

Chthonians are described as immense squids, with elongated worm-like bodies coated with slime. Despite their squid-like appearance, chthonians are land-dwellers and are even harmed by water. Chthonians are powerful burrowers, live for more than a thousand years, and are protective of their young. It is said that a chanting sound accompanies every chthonian, and that by such they can be detected while underground and unseen.

The most important individual chthonian is the gigantic Shudde M'ell, which is worshipped by the rest.

In Greek mythology, "chthonian" refers to beings that inhabit the underworld; they are considered to be the dark, shadowy counterparts of the Olympians.

The species is the creation of Brian Lumley and was first featured in his short story "Cement Surroundings" (1969) - though the creature never made a direct appearance. The chthonians had a more prominent role in Lumley's novel The Burrowers Beneath (1974), whose title was taken from a fictional story from Lovecraft's "The Haunter of the Dark". 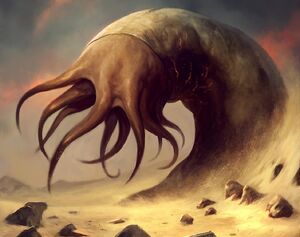 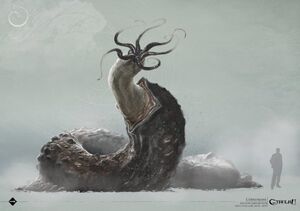 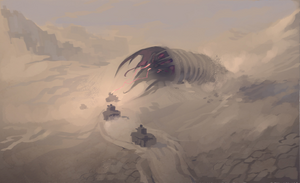 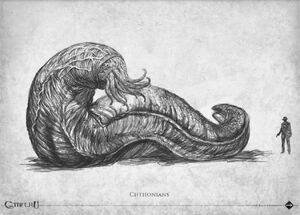 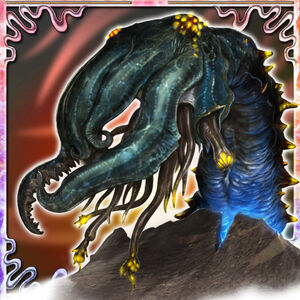