The H.P. Lovecraft Wiki
Register
Don't have an account?
Sign In
Advertisement
in: Articles including information from the Expanded Cthulhu Mythos, Roleplaying Games, Expanded Mythos Works

Conan: Adventures in an Age Undreamed Off is a pulp adventures sword and sorcery roleplaying game which is set during the Hyborian Age, circa 10,000 BC during the period of Conan the Cimmerian. It is based on the universe created by Robert E. Howard. The game incorporates the Cthulhu Mythos, mostly in the background and in the shadows, occasionally encountered. It was first released in 2017 by Modiphius Entertainment and uses the d20 game system.

The world of Conan is set 500 years before the end of the Hyborian Age and 6000 years before the beginning of known recorded history, the Sumerian civilization of Mesopotamia. It's a world in which various bronze and iron age kingdoms and empires have been established by man, from the west coast of the supercontinent to the east coast. Some of these empires are ancient, having been around for 1000s of years and others only for 100s of years. Humans are the dominant lifeform but they are not only one. There are small, hidden surviving remnants of elder monstrous races, ranging in size from small tribes living in isolated locations or allied with a dark sorcerer to the Serpent Folk, the most numerous of them all but still vastly outnumbered by man. Another race, but smaller in number are the Winged Ones, who haunt the ruins of their once great civilization. Under the waves of the seas, lie the hidden civilization of the Dwellers of the Deep who kidnap men and women, and take them to their cities for depravities. It's a world where there are monsters, both the supernatural kind created or summoned by sorcerers and those of the natural world (e.g. dinosaur-like), the last remnants of a bygone age.

In the lands that would one day become continental Europe, the light-skinned and fair haired Hyborians dominated with Aquilonia and Nemedia the main kingdoms. At the far end of the continent was the empire of Khitai, the largest and perhaps oldest empire, whose people were similar to the Asians of latter China. In between were various realms, many of mixed-lineage and the great steppes of Hyrkania where the Hyrkanian hordes dominated. The second greatest power was Turan, an empire established by Hyrkanians on the coast of the Vilayet Sea between Hyrkania and the west. Southwest of Khitai is Vendhya, a land made of up castes, in which the natives are ruled by a caste made up of conquering Hyrkanians. South of Hyboria was the ancient and sinister empire of Stygia, ruled by dark sorcerers and their Serpent People allies. To the north of Hyboria was the witch kingdom of Hyperborea and the barbarian Picts, Cimmerians, Vanir, and Aesir. South of Stygia were the Amazons and a collection of black kingdoms. Further south was the last dominion of the Serpent Folk.

The people of these lands worshiped a wide variety of gods and spirits. Among them were the pantheons of the Khitans, Vendhyans, Stygians, Hyborians, Stygians, and others. Pantheons which for the most part consist of human-like gods and goddesses with human-like emotions and agendas. In most of the "civilized" world, the worship of these gods is guided by priests who may or may not have a hierarchy. In Khitai, worship of the gods and spirits is done via temples and shrines at home. Among the "barbarians" it is usually shamans who have the ear of the gods or spirits. Worship of the entities of the Mythos is mostly hidden in the world of Conan, as it's the darkest and most dangerous type, and often persecuted by the authorities. The worship of the Mythos is done by blasphemous cults and pacts are formed with them by dark sorcerers.

Gallery of Maps of the Hyborian Age[]

Valeria of the Red Brotherhood (Pirate)

Gallery of the Cthulhu Mythos[] 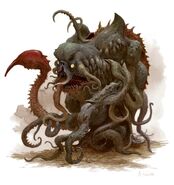 Dweller of the Deep (Race)

Demon-Blooded (Child of the Outer Dark)

Princess Yelaya, High Priestess of a Great Old One Cult

Devil of the Outer Dark 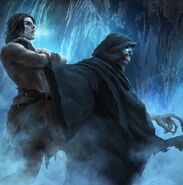 Child of the Dark 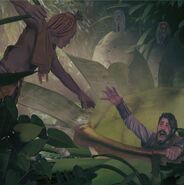 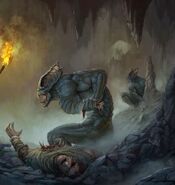 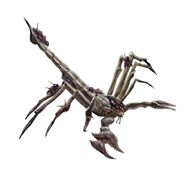 Gallery of the World of Conan[] 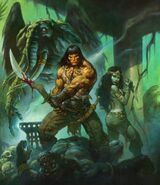 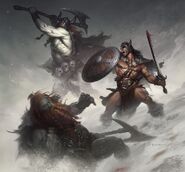