The Living Flame
The Burning One
Kathigu-Ra

"The House on Curwen Street"

Cthugha is a fictional deity in the Cthulhu Mythos genre of horror fiction, the creation of August Derleth. He first appeared in Derleth's short story "The House on Curwen Street" (1944).

Cthugha resembles a giant ball of fire. He is served by the Flame Creatures of Cthugha. Fthaggua, regent of the fire vampires, may be his progeny. He has at least one other known progeny, the being known as Aphoom-Zhah.

In Derleth's version of the Cthulhu Mythos, Cthugha is a Great Old One, an elemental spirit of fire opposed to the Elder Gods.

In August Derleth's short story AWD: "The Dweller in Darkness" (1944), the protagonists attempt to summon Cthugha to drive an avatar of Nyarlathotep out of a forest in northern Wisconsin.

Cthugha. Illustration from the book H.P. Lovecraft. Pantheon and Bestiary 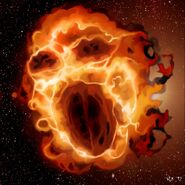 Cheat Reincarnated Hero, Cthugha (Housamo)
Add a photo to this gallery
Retrieved from "https://lovecraft.fandom.com/wiki/Cthugha?oldid=40948"
Community content is available under CC-BY-SA unless otherwise noted.