The H.P. Lovecraft Wiki
Register
Don't have an account?
Sign In
in: Articles including information from the "Lovecraft Circle" Myth Cycles, Sentient species, Extra-terrestrial species,
and 4 more

HPL: "At the Mountains of Madness"

The Cthulhi (also known as the "star-spawn of Cthulhu" and as Xothians) are a species that have a physical similarity with the Great Old One Cthulhu, but are of far smaller size. They have been known to make war against the Elder Things (HPL: "At the Mountains of Madness" / EXP: "Papyrus of the Dark Wisdom", Lin Carter)

Initially described as "a land race of beings shaped like octopi and probably corresponding to the fabulous pre-human spawn of Cthulhu," (HPL: "At the Mountains of Madness") the Star-Spawn are also described as being "composed of matter more widely different" than that which is native to our universe. And their physicality so malleable that they might to some small degree be called shapeshifters, for "They were able to undergo transformations and reintegrations impossible for [The Elder Things]."

This aspect is even contrasted against the Elder Things descriptions as "strictly material" and native to "the known space-time continuum", implying an origin with perhaps vastly different governing laws of nature to limit the Star-Spawn.

After a period of peace and apparent prosperity during which many cities were built, the lands on which the Star-Spawn cities had been built sank into the sea for reasons unknown, though presumably natural reasons, including the city of R'lyeh, at which time all the Star-Spawn present on earth either perished or went into a death-like sleep similar to their apparent forebear Cthulhu (in "The Call of Cthulhu " it is stated that the Great Old Ones could not live while the stars were wrong). It is unclear at this point whether Cthulhu was present at the time that R'lyeh sank, or if he joined it at the bottom of the oceans at some later time.

From this point on the Star-Spawn ceased to be a major power on the earth and were replaced by the Elder Things. (HPL: "At the Mountains of Madness") 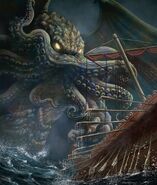 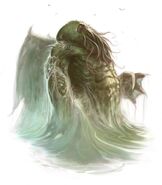 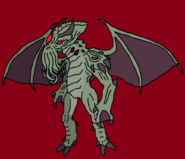