The H.P. Lovecraft Wiki
Register
Don't have an account?
Sign In
Advertisement
in: Articles including information from the Expanded Cthulhu Mythos, Roleplaying Games, Books

CthulhuPunk is set in the mid 21st century in a dystopian cyberpunk future. The United States is no longer the land of the free but a dictatorship. Global climate change has gotten worse, a plague devastated the world, and another plague turned Australia into a graveyard. Cyberwear is commonplace and netrunners use neural interfaces to link to cyberspace. It's a world in which man-portable laser and gauss weapons are new to the market. Geo-politically it's a multi-polar world and the United States is no longer a superpower much less a hyperpower. There are megacorps that are more powerful than many nations and several global criminal syndicates whose power can compare to that of a megacorp. The masses are entertained by gladiatorial sports, virtual reality, sensory chips, drugs, gambling, sensationalist news, pornography, and the suicide of snuff artists. In the background, hidden in the shadows is the Mythos. Outer Gods, Great Old Ones, and various races and cults that are corrupting human society, manipulating mankind, and/or bringing madness, terror, and/or death.

The world's economy is dominated by the "Bolshy Ten" which are their own small autonomous borderless states, each with over $1 trillion in assets. Whose ranks are dominated by the Russo-Japanese Korps (six in the Bolshy Ten), with the Chiletina Korps rapidly rising (one in the Bolshy Ten and three in the top 20). The Bolshy Ten have their own military and currency, espionage and diplomatic arms, and public welfare services. Lording over the employees like feudal lords are the executives. They are for all intents and purposes the last bastions of the illusion of progress and civilization, and therefore corporate employees are the least prepared to face the Mythos. 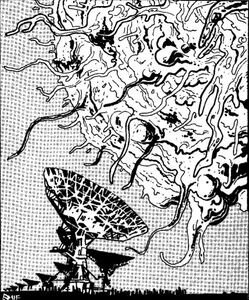 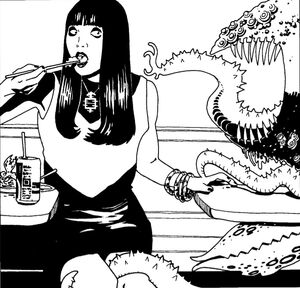