🔀 This is an article about the character. For the story in which it first appeared, see Dagon (short story).

Dagon is a deity who presides over the Deep Ones, an amphibious humanoid race that currently resides in the Earth's oceans. He is first introduced in Lovecraft's short story "Dagon", and is mentioned extensively throughout the mythos. Also known as Father Dagon and the consort of Mother Hydra, although they are Deities, they are generally not considered Great Old Ones.

He is worshipped by the Esoteric Order of Dagon, a secret cult based in Innsmouth.

At a very advanced age, some Deep Ones reach enormous sizes (citation needed). Such individuals engender the Cult of Dagon, who worship these creatures as deities. They are, in fact, entirely corporeal beings whose great age contributes to their massive size. There is fossil evidence that the oldest, largest of these beings reached sizes of over 50 feet in height.

Dagon is an enormous specimen of a Deep One that has been mentioned in texts since ancient times (citation needed). He is worshipped as a deity by a devout cult of both humans and Deep Ones. While apparently immortal, his longevity may be attributable to his fraternization with the Star Spawn, who sometimes select formidable specimens from a given species to protect, nurture, and empower for reasons known only to them (citation needed).

It may also be that there has been more than one gigantic specimen of Deep Ones who could have been confused with or mistaken for the original Dagon. All Deep Ones continue to grow slowly after they reach maturity, provided that they have access to enough nourishment. In fact, there are ancient Dagon-related carvings that display what appear to be several gigantic Deep Ones wrestling with whales.

The biblical 'Philistines' worshipped the god Dagon, mentioned in the old testament in Judges 16:23.

Lovecraft most likely based Dagon on the ancient Mesopotamian deity of the same name, who was a god of fish, fishing, and fertility. 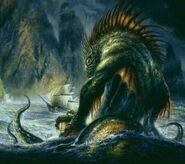 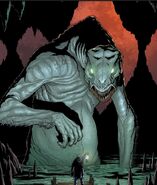 Dagon, as it appears in Russell's Guide (merzo.net)