The H.P. Lovecraft Wiki
Register
Don't have an account?
Sign In
Advertisement
in: Articles including information from the Mythos Influenced Works, Extra-Dimensional Characters, Characters Originating From Mythos-Adjacent Works,
and 2 more 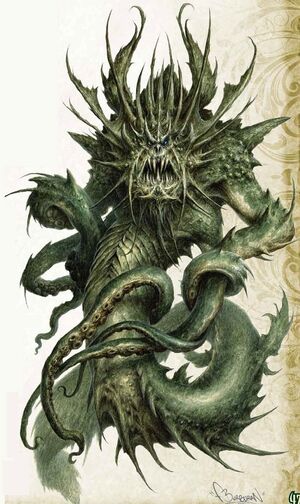 🐙 Dagon (AKA Shadow Lord of the Sea and Demon Lord of the Sea) is a Lovecraftian-like demonic entity from the fictional universe of the Pathfinder paper-and-pencil roleplaying game by Paizo inc. It is clearly directly derived from H.P. Lovecraft's version of Dagon rather than from the semitic deity mentioned in ancient texts such as the Bible.

Dagon is a Qlippoth Lord who was originally a mindless sea monster. As it consumed more demons, it gained an intellect. It resides in the sunken city of Ugothanok, with its alien architecture. Its form is a foul hybrid of octopus, eel, and fish with four tentacles, a monstrous face, and the lower body of an eel. It measures 35 ft. and its spawn usually take its form.