Elder Gods, Many Sided Ones

The Dark Giants are a race or group of demonic-like extradimensional entities in the DC Comics Multiverse which were created by Gail Simone and Dale Eaglesham and were the primary antagonists in the latter half of the 14-issue Secret Six Vol 4 comic run. It was also in that series were they were given the name of Dark Giants, though in earlier comics the entities that Eldritch extra-dimensional entities which had appeared in them (e.g. M'nagalah) were called Elder Gods. So far the only Cthulhu Mythos entity revealed to be a member of the race is M'nagalah who in this multiverse influenced the works of Howard Phillips Lovecraft.

On Earth, there is a cosmic doorway. Which provided the elder gods the ability to roam the cosmos at will. A billion years ago, their rivals for control of the universe, the "Golden Ones" banished them. Millions of years ago, Earth was plagued by their kind, though as to whether they returned to this universe or not all had been banished is not known. Earth was a playground to them, it's life vermin and entertainment. They fed on its lifeforms, receiving pleasure from their fear and pain. One of their kind (M'nagalah) claimed to be responsible for the rise and evolution of life on Earth. Upon the ascent of mankind, the "One Over All" (the multiversal god), banished them again (the whole race or those that had remained behind).

Despite their banishment, the Dark Giants continue to influence mortals in the universe and search for ways to get back to that reality. It was the Dark Giants who gave the human race violence and evil. M'nagalah has been observing the universe since before man emerged and has shown an interest in Earth for millennia. On occasion they'll reach out and influence learned men, and with their visions twist their intellect and corrupt their souls. M'nagalah has been successful in establishing a physical beachhead on Earth, and several of his brethren have made similar attempts (e.g. Koth-Shugoth and Thrumm). At least one of them was imprisoned on Earth, within a mystical crystal, the entity Syththunu. 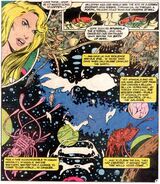 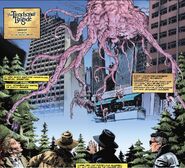 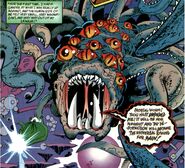 Syththunu, an Elder God
Add a photo to this gallery
Retrieved from "https://lovecraft.fandom.com/wiki/Dark_Giant?oldid=29179"
Community content is available under CC-BY-SA unless otherwise noted.