HPL: "The Shadow Over Innsmouth"

The Deep Ones are an ocean-dwelling race, as evidenced by their name, with an affinity for mating with humans.

They entered a contract with the people of Innsmouth to keep the fish plentiful in their area. They also seem to have a supply of gold artifacts of unearthly design. The Deep Ones worship Father Dagon and his consort Mother Hydra. (HPL: "The Shadow Over Innsmouth")

The Deep Ones are humanoid beings with fish, human and amphibian-like traits, they are described as having grey-ish green, glossy and slippery skin with white stomachs. They have scaled, ridged backs, as well as webbed hands and gilled necks. Notably, they have a head similar to that of a fish, with eyes incapable of blinking.

They move about in an inhuman fashion, by hopping oddly, and occasionally move on all fours. The narrator, Robert Olmstead, describes them as having abhorrent, croaking voices that spoke a language other than English. Their form was so horrid that their mere appearance caused Robert to lose consciousness for a while. (HPL: "The Shadow Over Innsmouth")

All hybrids are shown coming from a female Deep One and a male human. It is a safety measure based on the fact that both of those possess the limiting growth gene of their own species, otherwise the child would become much larger. It is similar to a liger, a hybrid born from a male lion and a female tigress who never stop growing until their maturity. (EXP: Providence, Alan Moore)

When the hybrid becomes too obviously non-human, they go into seclusion in ostensibly abandoned buildings until fully capable of living solely underwater. The rate of progression varies with each individual. However, it normally does not reach completion until the human middle age. Once this transformation is complete they are also functionally immortal. Apart from the physical change they also feel a scorn for humanity, an affinity for the Non-Euclidean artwork of the Deep One race, and an increasingly powerful desire to abandon the human world and go to the Deep One city of Y'ha-nthlei. Asenath Waite is a notable Deep One but she was killed before the transformation could finish.

Deep One (The Chilling Adventures of Sabrina) 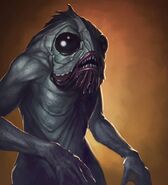 Deep One (Cultists of Cthulhu) 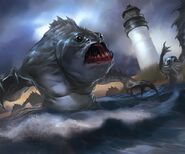 Dweller of the Deep (Conan: Adventures in an Age Undreamed Of) 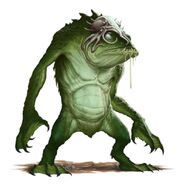 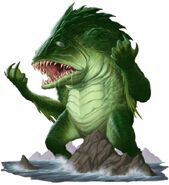 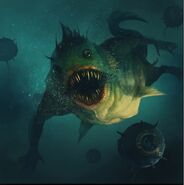 Deep One, as it appears in Russell's Guide (merzo.net) 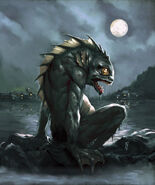 Deep One (Trail of Cthulhu)

Deep Ones (Haunt of Horror Lovecraft) 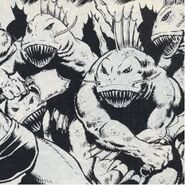 Deep Ones (Savage Sword of Conan)

Deep One Hybrid (Dagon movie)
Add a photo to this gallery

This article is a stub. You can help the The H.P. Lovecraft Wiki by expanding it.
Retrieved from "https://lovecraft.fandom.com/wiki/Deep_One?oldid=40933"
Community content is available under CC-BY-SA unless otherwise noted.