Gigantic worms reaching over 600 ft. in lenght and 20 ft. thick; their skin is armor-clad with thick chitinous-like sections. At one end is the feasting mouth, hidden beneath a segmented aperture, which closes right when burrowing below

Dholes, also called bholes, are huge, slimy worm-like creatures, at least several hundred feet long. Because they avoid daylight and are covered in viscous goo, their features are nearly impossible to discern. Similar creatures called bholes exist in the Vale of Pnath in the Dreamlands.

Dholes are gigantic worm-like burrowing horrors. They are not native to Earth and none seem to be brought here for more than brief periods - fortunately, for they seem to have riddled and laid waste to other worlds, consuming them from within. It is unknown how they reach new worlds, but theories include magical summoning to "swim" through space. Some speaks of Dholes traveling via the The Dreamlands, forcing their way through the inter-dimensional fabric of dream to reach distant places.

They are rarely seen in daylight, and then only on planets that they have thoroughly conquered, as they dislike direct light, though it does not visible harm them. Likewise, water does not affect them as it does some other worm-like Mythos entities (like Chthonians). 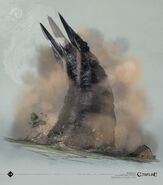 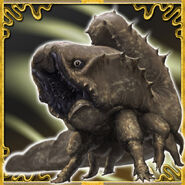