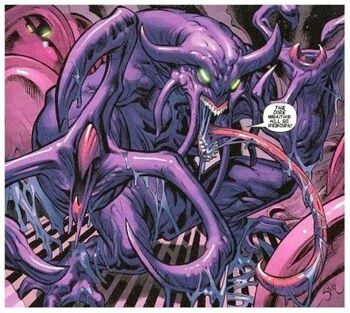 The Dire Wraiths are a Lovecraftian-like extra-galactic vampiric race and cosmic horror element in the fictional universe of Marvel by Marvel Comics. The primary antagonists in the cosmic horror event known as "Wraith War".

The Dire Wraiths are a vampiric race of shapeshifters, descended from the Skrulls who were exiled from Skrull space and hunted by them ever since. They have a somewhat troll-like appearance and possess a drill-like tongue which is used to suck out their victim's brains. Which they consume and in the process absorb all of the victim's memories. The females are witches, practitioners and masters of the darkest alien magic who are able to summon or create mystical or genetic abominations, using dark sorcery.

The males in turn are scientists who prefer using science to copy the memories of their victims and to develop weapons of war, including directed energy weapons, interstellar warships, and synthetic humanoid constructs (robots). Under the orders of the Wraith Queen, the Dire Wraiths combined science with sorcery to spread their evil across the stars. They were finally defeated by the Galadorian Spaceknights and have scattered across the cosmos, infiltrating primitive worlds and bringing their terror to them. While on Earth, during their attempted conquest of the planet, they created and deployed various abominations. Their greatest eldritch weapon is the Deathwing (which can vary in size), a darkforce winged shadow entity which fills those in its presence with terror and drains their lifeforce.

Gallery of the Dire WraithsEdit

Retrieved from "https://lovecraft.fandom.com/wiki/Dire_Wraith?oldid=24630"
Community content is available under CC-BY-SA unless otherwise noted.