🐙The Dominion of the Black, also referred to as Dominions of the Black and the Black Truth, is a sinister intergalactic organization controlled by Lovecraftian-like entities in the fictional universe of Pathfinder a pencil-and-paper roleplaying game by Paizo Inc.

It's a intergalactic conglomeration of races who serve a group of vast and powerful alien intelligences. These alien intelligences are similar to the Great Old Ones but do not use magic and they are beings of the material plane. Entities which are at least as powerful as the Great Old Ones and perhaps more, who have vast psychic powers. One of which is Tychilarius, a massive abomination created by the fusing of thousands of smaller abominations in the center of a black hole. The Dominion of Black is not a state but a network of worlds controlled by them, which are used as facilities to produce weapons and servitor races by using bio-mechanical technology, cybernetics, and genetic engineering.

Worlds are conquered to provide their biotech fleshfarms with more input. Their forces include monstrous servitor races and are equipped with interstellar starships with faster-than-light capability and directed energy weapons. Its members view humanoids as inferior, good only as raw material, to experiment on, and to manipulate their genes. Scholars state that the Dominion of the Black is in actual opposition to the Elder Mythos. No one knows their agenda, but it's rumored that their ultimate goal is the extermination of all life in the cosmos and/or its replacement with something else from another reality. 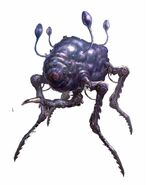 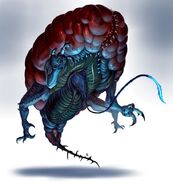 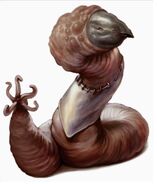 Chyzaedu
Add a photo to this gallery
Retrieved from "https://lovecraft.fandom.com/wiki/Dominion_of_the_Black?oldid=33820"
Community content is available under CC-BY-SA unless otherwise noted.