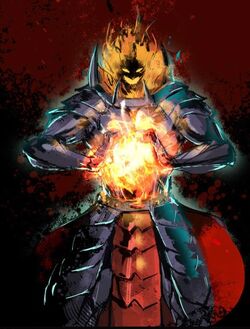 Dormammu is an eldritch extra-dimensional entity from the fictional universe of Marvel by Marvel Comics.

Dormammu is a demonic god-like sorcerer who rules the Dark Dimension. He is a billion years old and is one of the Faltines a race of beings of pure magic who was exiled from their dimension. Faltines are made of energy, and if a Faltine was to manifest in NY City, half of the city would be instantly destroyed. His power eclipses that of Mephisto and other demonic entities, though his own power is vastly eclipsed by multiversal demonic entities such as Shuma-Gorath or the One Below All. He commands armies of demons, which guard his dimension, are deployed in wars against other demonic entities and their realms, and are used to invade and conquer dimensions.

He has conquered many dimensions and is obsessed with conquering the Prime Reality due to his many defeats at the hands of Doctor Strange. Dormammu has challenged the Celestials and even Eternity, once temporarily replacing Eternity and conquering the universe which he remade in his image. Apart from Doctor Strange, other Earth heroes have fought it. He has a sister, the beautiful Umar, who was exiled alongside him. She is his ally, co-conspirator, rival, and enemy, depending on her mood. A powerful being in her own right, but not as powerful as Dormammu yet more cunning. Like her brother, she too is obsessed, though in her case its in the pleasures of the flesh.

Retrieved from "https://lovecraft.fandom.com/wiki/Dormammu?oldid=24623"
Community content is available under CC-BY-SA unless otherwise noted.