The H.P. Lovecraft Wiki
Register
Don't have an account?
Sign In
Advertisement
in: Articles including information from the "Lovecraft Circle" Myth Cycles, Characters Originating From Lovecraft Circle Works, Other Supernatural Beings, Deceased (In Mythos)

The Dunwich Horror, or Yog Whateley, (EXP: Dark Adventure Radio Theatre: The Dunwich Horror) is the inhuman child of Lavinia Whateley and the Outer God, Yog-Sothoth. It was conceived to free the Great Old Ones so that they may reclaim the earth.

Its existence was kept secret by its grandfather, mother, and eventually its twin brother, Wilbur Whateley. It fed on cattle growing up, draining them of blood before devouring them completely. The intense stench of the abomination kept away most passersby.

On September 9th 1928, the creature broke free from the Whateley farmhouse, littering the hillside with wooden planks soaked with an odd viscous substance. Barrel-sized tracks were found leading to a meadow where over half a herd of cows were drained of blood.

In its natural state the being is invisible to the human eye, but a special powder can render it visible for a few seconds. A distant relative of him, Curtis Whateley, was immensely disturbed by the hideous sight of it and was barely able to form a sentence to describe it. Curtis described it as bigger than a barn, made of wiggling strings that are tied together and shaped like a chicken egg. The creature possesses dozens of legs that are as big as barrels, has big eyes all over it and ten or twenty grey mouths of trunks on its side with blue or purple rings over them that are as big as ovenpipes. On top of the creature, there is half a face, which lacks a chin, has red eyes and white, frizzly albino hair. The face looked just like the face of Wilbur Whateley's grandpa. It is also described as not solid and as if it is made of jelly. Curtis also described it as something like a squid, a centipede or a spider.

Its final words were a cry of help to its father, after which the creature was destroyed for good by the spell cast by Henry Armitage and his colleagues, its essence banished back to the realm of its father.

According to one account, Lovecraft based him on John-Divine Wheatley through Robert Blake's Commonplace Book. (EXP: Providence)

Another from skullbeast on deviantArt

The Dunwich Horror as it appears in Russell's Guide (merzo.net) 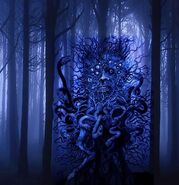