The Elder Sign is a symbol that is used to protect against the Great Old Ones/Outer Gods, who seem to fear it. It is engraved on most of the sealed doors in R'lyeh. Based on Lovecraft's original letters and work it is worth observing that Lovecraft himself at times seemed to consider the sign a hand gesture.

A farmer and his wife "make the Elder Sign" when questioned about the Great Ones by Randolph Carter, and rather than giving any information briefly indicate the way to the town of Ulthar. (HPL: The Dream-Quest of Unknown Kadath

The Old Ones sign used to defeat the Deep Ones resembled a swastika. (HPL: "The Shadow Over Innsmouth")

Kthanid is supposedly responsible for the Great Old Ones' fear of the Elder Sign by burying it in their subconscious'. (EXP: Titus Crow)

The Elder Sign is generally represented by a five-pointed star that has been distorted along its lines and contains an eye-flame symbol in the centre. (AWD: "The Lurker at the Threshold")

The Elder Sign was also represented as a six-pointed "branch" as drawn by Lovecraft in his letters alongside the Seal of N'gah, referencing the ficitve Dark Cycle of Y'hu. (HPL: "Selected Letters of H. P. Lovecraft" 3.439)

The Hay Necronomicon also represented the Elder Sign as a gesture which consisted of joining the tips of one's thumb and little fingers. It also described the sign of Voor, of Kisk and of Koth.

An item called the Elder Sign appears in the video game Ogre Battle 64 for the Nintendo 64. It can only be equipped by magic using classes. 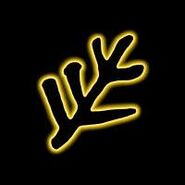 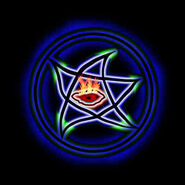