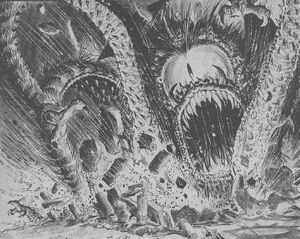 The Elder Spirits are a Lovecraftian-like extra-terrestrial race from the fictional universe of Marvel by Marvel Comics.

The Elder Spirits are a race of invisible shapeless aliens who crossed the void of space to reach Earth. For a time they ruled the Earth but upon the rise of man in Lemuria they retreated to Thuria and when man established its dominion there, they went into hiding. Waiting for the time to reestablish their rule over the Earth. During the Hyborian Age, one of them which was known by the locals as the "Sleeper Beneath the Sands" was later encountered by Conan.

Retrieved from "https://lovecraft.fandom.com/wiki/Elder_Spirit?oldid=24634"
Community content is available under CC-BY-SA unless otherwise noted.