The Eldrazi are Lovecraftian-like entities and the cosmic horror element in the fictional multiverse of Magic: The Gathering, a collectible card game from Wizards of the Coast.

The Eldrazi are entities that live in the Blind Eternities, a space full of chaotic energies that exists between the planes of the Multiverse. A space that is so inhospitable that only planeswalkers and the most powerful of gods are able to enter the Blind Realities and survive. The Eldrazi are ancient noncorporeal entities that are forever hungry, traveling between the planes and devouring planets' mana and life energy.

Drones of the Eldrazi[edit | edit source]

The lineage of Emrakul is the most bizarre of all the drones. Its members are characterized by lattice-like flesh and are of unnatural hues. They lack any identifiable sensory organs, many of them possess tentacles, and/or have unconventional forms. The progeny of Kozilek, in turn, have numerous eyes throughout their body, though rarely any on the head. Floating around their bodies are large jagged plates, and like their maker, they have bisecting arms. Those born from the lineage of Ulamog have a bony mask on featureless heads, bisecting arms, and also possess tentacles.

Ulamog
Add a photo to this gallery 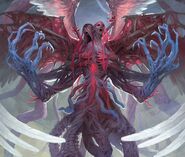 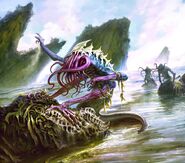 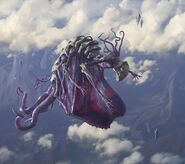 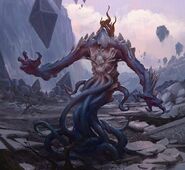 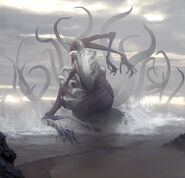 Hanweir the Writhing Township (town corrupted into Eldrazi ooze)
Add a photo to this gallery
Retrieved from "https://lovecraft.fandom.com/wiki/Eldrazi?oldid=33700"
Community content is available under CC-BY-SA unless otherwise noted.