The H.P. Lovecraft Wiki
Register
Don't have an account?
Sign In
Advertisement
in: Articles including information from the Expanded Cthulhu Mythos, Roleplaying Games, Expanded Mythos Works

Eldritch Skies is a horror science-fiction role-playing game based on H. P. Lovecraft's Cthulhu Mythos set during the mid-21st century. The game is published by Battlefield Press, uses the Savage Worlds gaming system, and was published in 2010.

The game is set in an alternate Earth, where human history diverged in the mid 20th century. The two superpowers (United States and the Soviet Union) discovered the reality of the Mythos during the early stages of the Cold War, and a Mythos-based arms race began between the two. Eventually leading to the revelation of the Mythos to the public and human exploration and colonization of the Solar System and worlds in other star systems. Mythos races in this reality (e.g. Mi-go and Deep Ones) do not pose existential threats but interaction with them has changed the human race. Use of hyperspatial technology and traveling via hyperspace is risky to lifeforms as hyperspatial energies will mutate you (depending on the amount), with the possibility of ending up with monstrous mutations and/or an insane mind. In the background is the ever present threat of a extradimensional vampiric race of world destroyers, led by Cthulhu.

History of the Earth[]

Humanity has established colonies on 6 habitable worlds outside the Solar System and permanent research base on various other worlds. They have also colonized Mars and the Moon, and have bases across the Solar System. Have several hundred interstellar transports, which have transported 6 million colonists. By 2040 the total human population not on these colonies totaled 12 million, of which the two oldest extra-solar colonies each have a couple million.

The human race possesses a variety of technologies, including: robots, electronic telepathy, microelectronics, and hyperspatial technology. Advances in medicine have extended their lifespan to an average of 125 years. Numerous diseases have been cured and 12% of humans have received biological augmentations giving them new abilities (including superhuman ones).

The UN Security Council is the only one with the authority to negotiate treaties with alien governments and species. Permanent members are China, the US, and EU. Charged with investigating the paranormal and protecting humanity from dangerous technologies (e.g. hyperspatial) and phenomena of the Mythos is the Office of Paranormal Security (OPS) which was established by the United Nations.

In China the quality of life is equivalent to that in the EU and the US, but it's an authoritarian state, ruled by the party (which is communist in name only). It's a major human power in space colonization with a major colony in Mars. The EU is the most prosperous of the world powers, has the highest standard of living, and is a world leader in human rights. It is far behind China and the US when it comes to colonizing space. Both China and the EU have surpassed the United States when it comes to new technologies since the early 21st century.

Operating within the human race are cults that worship Cthulhu, Nyarlathotep (e.g. Starry Wisdom) and other Great Old Ones. There are also rogue humans, Deep Ones, psychics, sorcerers, etc who do business with hostile aliens (e.g. Flying Polyps), form pacts with Great Old Ones, or misuse hyperspatial technologies for their own sinister or selfish agendas.

It's a race which evolved on Earth approximately 80 million years ago, and were very skilled in sorcery and psionics. They used ritual sorcery in hyperspatial sorcery and had scientific sorcery. The asteroid that ended the dinosaurs nearly annihilated the Serpent People. In the aftermath, a half million used a drugs to go into a state of suspended animation, sleeping for millions of years. In the meantime what remained of those who stayed awake, retreated to caverns where they built a subterranean civilization which never reached the glories of the previous civilization. Five million years later it too had fallen, and the Serpent People became a savage and primitive race, most of whom died out.

200,000 BC, one of the caverns of sleeping Serpent People awoke under North Africa and built a new subterranean civilization. Then in 45,000 BC a faction of them went to the surface and eventually located one of the other caverns where they awakened its Serpent People. Though they numbered less than 250,000, they tamed and educated primitive humans, and built an empire of nearly 10 million human servants. A number of Serpent kingdoms were established across Africa, the northern parts of North America, and most of Europe which used these humans and Neanderthals in their armies.

Humans later overthrew them, and the surviving Serpent people went underground. Today they are mostly savages of limited intellect, totaling 50,000. Under Europe and Africa (and Colorado) are a few enclaves of civilized serpent people who number 20,000. There is also a lost cavern of Serpent People who are still sleeping, with 250,000. Out in the stars are three colonies of Serpent People who had fled the fall of their empire in the Thurian Age. The smallest is a small colony and the greatest has tens of millions of human slaves ruled by a million serpent people.

The Shoggoth are a race which was engineered by Elder Ones on Earth, which they lost control of eons ago. It is estimated that there at most a 1000 still active on Earth, with another several thousand believed buried within the ice of Antarctica or imprisoned in prisons, waiting for someone greedy or foolish to release them. Shoggoth will avoid or kill any humans they come across.

The Outer Gods are the active personifications of the universe's primordial forces. In the universe energy and mind are inseparable and therefore intelligence will eventually rise from any pattern of energy that is complex enough. These aspects don't live within hyperspace, they are part of hyperspace. Entities like Azathoth, Shub-Niggurath and Yog-Sothoth. If a species makes contact with an Other God, it sometimes results in the transcendence of that species. Other Gods have no need for the physical universe and therefore only notice it when they are provoked. Catching the attention of an Other God can be catastrophic. 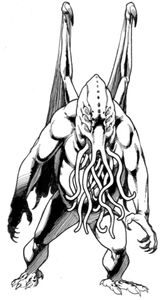 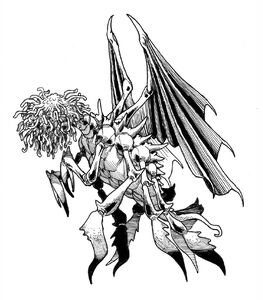 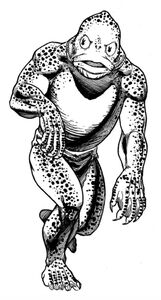 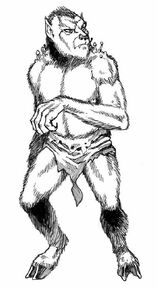 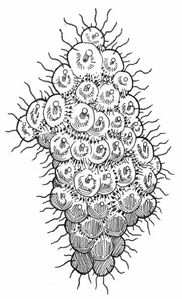 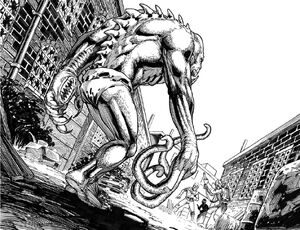 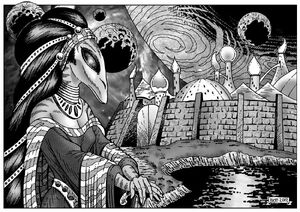 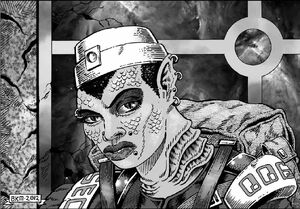 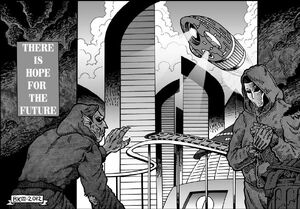