The Fire Vampires are monsters that first appear in August Derleth's The Dweller in Darkness.

Fire Vampires are intelligent plasma or gas matrices that, upon entering an atmosphere with sufficient oxygen, burst into flames. They can appear in the form of a point of fire, a spiral of fire, a ray of fire, or as very bright fireflies.

They are normally found in the Fomalhaut star orbit with Cthugha. Some others are found on the planetoid Ktynga with Fthaggua. They usually appear as a kind of escort to Cthugha when summoned, burning everything where the Great Old One will appear. Fthaggua uses them to collect information from some world to conquer and that serves as a food source for them. They can also be independently summoned by some warlocks, but they can only do this when Fomalhaut is in the sky. Fire Vampires often develop a type of connection to the place or places they burn. This connection apparently affects the entire species: that is, invoking fire vampires in general is easier in some area that was burned by them in the past, but nothing indicates that it is always the same vampire that appears to be invoked. To summon them you need to have a big bonfire lit under the night sky on a night that Fomalhaut is on the horizon. The fire vampire will appear above the campfire.

Fire Vampires attack, obviously burning their victims. However, by burning and living up to their name, they absorb the power, memories and magic of those they attack, thus increasing their own knowledge and skills in the magical arts. They can launch their attacks in the form of flaming rays, or they can touch or touch their victims. The appearance of those attacked by a fire vampire is the same as that of a person victim of spontaneous human combustion, so it is probable that many of these cases have actually been attacks by these beings. They are immune to all physical weapons, as well as fire and electricity, but can be extinguished.

Protecting or attacking a fire vampire is a relatively easy task. You can use water, sand or any available fire extinguisher. While a glass or bucket filled with water can harm a vampire, it will not kill him immediately. This would require a large amount of water. Hiding if possible in some aquatic body is also useful, since fire vampires cannot attack or chase anything or anyone in water.

A fire vampire appears in Bret Kramer's "Baggage Check" scenario, included in the first issue of "The Unbound Book," a ragged series of .pdf magazines created by New Zealand fans that contain a number of scenarios for the game. Role-playing game the Call of Cthulhu. Said being was trapped in a canopic vessel nearly two millennia earlier by Cthugha cultists, and patiently wishes only to return to the court of his god. The fire vampire maintains a symbiotic relationship with the holder of the vessel: while the latter takes the magic from the latter causing a brief but intense fatigue, the vessel grants him a greater quantity. It also increases the chances of being able to contact Cthugha. As a side effect, the owner becomes arrogant and paranoid about losing the pot, and appears to be more resistant to heat. For his part, the vampire uses the dreams of the owner to encourage him to worship Cthugha, showing him the Egyptian cult of the Slaves of the Flame Undying. This is not always effective, and the effects can range from zero to pyromania. If the vampire believes that the possessor will not join the cult, he may suggest in his dreams that he break the vessel. If that happens, the vampire will flee, unless he feels threatened: it is then that he will attack any non-cultist of Cthugha that is nearby. He cannot be wounded in a conventional way, but sand and water can be used against him, taking advantage of his millennia-long atrophy. 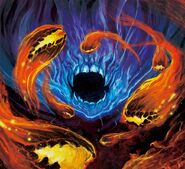 The Fire Vampires of Fthaggua
Add a photo to this gallery
Retrieved from "https://lovecraft.fandom.com/wiki/Fire_Vampire?oldid=33498"
Community content is available under CC-BY-SA unless otherwise noted.