🔀 This is an article about the species from "The Shadow Out of Time". For the ones from "At the Mountains of Madness," see Elder Thing

Flying Polyps are a race of extraterrestrial creatures. The creature first appeared in H. P. Lovecraft's "The Shadow Out of Time."

The precise nature of the flying polyps is unclear; the records kept by the Great Race of Yith are notably evasive, making fearful references but shying away from actual description. They are capable of flight, although they lack wings or other appendages to facilitate this, and they were capable of controlling air currents for offensive and manipulative purposes. Although airborne, they seem to make some contact with the ground during movement, as they leave behind five-toed radial footprints wherever they go.

The flying polyps first colonized the Earth about six hundred million years ago, predating the arrival of the Great Race of Yith. They built vast cities of basalt, their defining architectural features being tall windowless pillars or towers. They were an aggressive and predatory species, and when the Great Race transferred their minds to the indigenous organisms that would harbor them for aeons to come, they came into conflict with the polyps. The Great Race prevailed at first due to their superior technology, forcing the polyps back to the subterranean catacombs that lay beneath their cities and sealing off the tunnels with reinforced trap-doors. 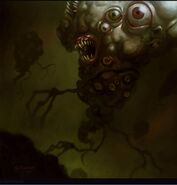 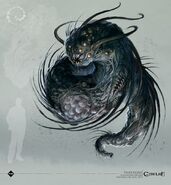 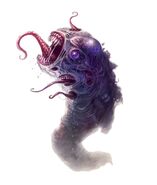 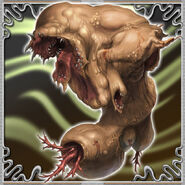