Black Slime, Fluid Ones, The Ichorous

A living ooze able to take temporary forms, like a mass of undulating limbs, or a great sphere possessing many mouths.

The Formless Spawn are amorphous entities in service to Tsathoggua.

These black, protean beings may be found in temples dedicated to the Great Old Ones or in deep sunless caverns, often acting as guardians and protectors of secrets. They may accompany or herald the arrival of a Great Old One or stand in the god's stead, or simply lie motionless for years at a time, like some quit dark pool waiting to be disturbed by the unawary. Whether they are born of a specific entity magically created is unknown.

Formless Spawns can change their form and shape in an instant, from toad-like lumps to elongated things with hundreds of rudimentary legs - to any conceivable form. Being a living viscous liquid, they can ooze through small cracks, usually finding a way through any obstacle, while also able to cast spells, and can form vocal organs to issue strange sounds - no record exist suggesting they have ever communicated with words a human could understand.

True to their name, formless spawns are polymorphic entities made of black ichor and look like amorphous goo. They are extremely resilient and very difficult to dispatch. Much like Shoggoths, they can shapeshift both to take various forms and to shape appendages to suit their needs for accomplishing their master's bidding and attack their targets in nearly every conceivable way. They are surprisingly flexible and plastic, and can quickly flow into a room through the tiniest of cracks. They attack by trampling their targets, biting them, or crushing them with their grasp. The Call of Cthulhu roleplaying game's entry on Formless Spawn also claims that they are powerfully acidic in substance and can dissolve human flesh with even a slight touch.

Formless spawn often rest in basins in Tsathoggua's temples and keep the sanctuary from being defiled by nonbelievers.

The Formless Spawn are found resting in a great basin beneath an idol of the god Tsathoggua by the thief Satampra Zeiros and his companion Tirouv Ompallios. Described as "a torrent of black quicksilver" and "an undulant ophidian form which immediately developed more than a dozen short legs" the creature attempted to devour the interlopers.

The people of the subterranean world of K'N-Yan had once worshipped Tsathoggua until a scientific expedition exploring N'Kai, encountered the Formless Spawn. Those who escaped had all the images of Tsathoggua destroyed, and his temple re-dedicated to Shub-Niggurath.

At the Mountains of Madness

In this story, H. P. Lovecraft states that "[a] few daring mystics have hinted at a pre-Pleistocene origin for the fragmentary Pnakotic Manuscripts, and have suggested that the devotees of Tsathoggua (includes Formless spawns) were as alien to mankind as Tsathoggua itself." Formless spawn themselves had no direct appearance in this story, but did feature another creature more horrifying than them despite sharing similar shape-shifting abilities to perform various tasks. 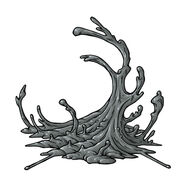 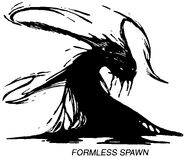 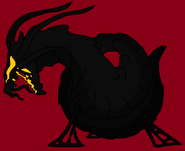 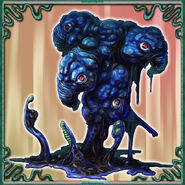