The Fractal Creatures are a fictional race created by Chaosium in 1995 for the Call of Cthulhu RPG.

Fractal creatures live in the fractal dimension which can only be accessed via a gate created by a computer. They manifest in the material plane as beings of pure energy which drift in the air in search of energy. There a various sub-species among the fractal creatures. Some of them are like herbivore, sipping energy from civilization's electrical currents. Others are like carnivores, feeding on the energy of life forms. Some of them are not much different from animals and others are intelligent lifeforms.

In the material plane their energies dissipate within 24 hours, forcing them to feed on a daily basis. Physical weapons are unable to harm them but energy attacks will harm fractals (e.g. microwaves, lasers, electricity, and ultra-sound). The race consists of numerous different sub-species. In their home dimension they serve Yog-Sothoth. 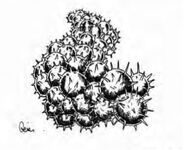 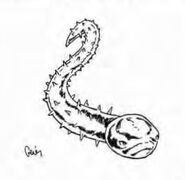 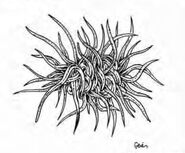 Predator
Add a photo to this gallery
Retrieved from "https://lovecraft.fandom.com/wiki/Fractal_Creature?oldid=29687"
Community content is available under CC-BY-SA unless otherwise noted.