The H.P. Lovecraft Wiki
Register
Don't have an account?
Sign In
Advertisement
in: Candidates for deletion, Articles needing citations, Articles including information from the Mythos Adjacent Works,
and 4 more

Gah Lak Tus is an eldritch mechanical entity in the fictional Ultimate universe (Earth-1610) of Marvel by Marvel Comics.

Gah Lak Tus is a vast collective of city-sized robotic drones that spanned 100,000 miles, which invaded worlds using heralds and a flesh-eating virus to exterminate all organic lifeforms. The planet's thermal energy is then exhumed from the core. The entity found all biological life abhorrent, and saw itself as desecrated when it was telepathically contacted by Professor Xavier of the X-Men. It traveled the cosmos for millennia, destroying every life-bearing world in its path.

It bombards worlds with psychic "fear", within hours making a world's population go permanently insane. Arriving on the planet head of Gah Lak Tus were its heralds, silvery humanoids. Which founded suicide cults and induced mass suicide among the world's inhabitants, thereby weakening any potential resistance. Once all life was extinguished, it cracked the world open and sucked it dry of energy. Modules would break open the planet all the way to the core. Within hours, it's flesh-eating virus would devours all life on the world. 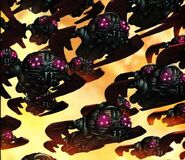