The H.P. Lovecraft Wiki
Register
Don't have an account?
Sign In
Advertisement
in: Articles including information from the Expanded Cthulhu Mythos, Books, Ebooks,
and 2 more

Gateways to Terror: Three Evenings of Nightmare is an introductory scenario book for Chaosium's 7th edition of their horror roleplaying game Call of Cthulhu.

Containing a trio of stand-alone adventures - each of which come complete with four pre-generated character and all necessary handouts - which were first created as demonstration games for the new edition of Call of Cthulhu, Gateways to Terror is an 88-page full-colour softcover book by Leigh Carr, Jon Hook and Todd Gardiner. Cover art was provided by Mariusz Gandzel, with interior illustrations by Chris Huth.

Gateways to Terror was released in 2020 in both print and digital formats. 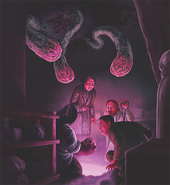