The H.P. Lovecraft Wiki
Register
Don't have an account?
Sign In
in: Articles including information from the "Lovecraft Circle" Myth Cycles, Article stubs, Species,
and 8 more

Ghouls are a species of cannibalistic humanoids featured in several of Lovecraft's works.

They are first depicted in the short story Pickman's Model, where the eponymous main character meets with the beings regularly to paint them in various poses and activities. It is revealed in The Dream-Quest of Unknown Kadath that Pickman is in fact a partial or full-blooded ghoul, and now resides with them in the Dreamlands as a chieftain.

In combat, they are known to use items such as headstones and were unfamiliar with other types of weaponry up until their battle with the Moon-beasts. It was here that they first discovered, and quickly mastered, the use of spears and of javelins. With this newfound technology, they were able to annihilate the garrison of Moon-beasts on the nameless rock off the coast of Sarkomand in the Dreamlands. 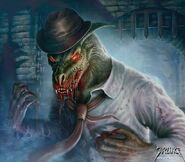 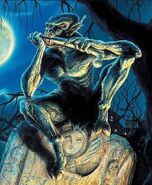 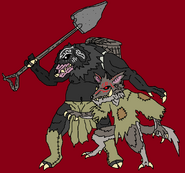 This article is a stub. You can help the The H.P. Lovecraft Wiki by expanding it.
Community content is available under CC-BY-SA unless otherwise noted.