The H.P. Lovecraft Wiki
Register
Don't have an account?
Sign In
Advertisement
in: Articles including information from the Expanded Cthulhu Mythos, Characters Originating From Expanded Mythos Works, Great Old Ones
English

"The Inhabitant of the Lake"

Gla'aki is a Great Old One which dwells in a lake in the Severn Valley near Brichester, England (though he has been reported in other lakes around the world).

As old as the stars themselves, Gla'aki has a vast reservoir of knowledge, not only of the supernatural entities that exist on Earth, but of those which predate it. Whilst he is aquatic in nature, in his physical form Gla'aki resembles nothing so much as an enormous slug with slender spines which appear to be made of matte metal, but which are in fact organic in nature. These quills can inject a substance to ensure its victims' compliance. Those skewered in such a way are granted Gla'aki's gift of everlasting life, albeit as an undead puppet. In addition, it is capable of forming tentacles tipped with eyes, so as to keep its true nature hidden whilst observing the world from beneath the water's surface.

Gla'aki's cult, a group of depraved humans both mortal and undead, wrote a series of scriptures known as The Revelations of Gla'aki. What these writings contain is unknown, though it cannot be anything good.

Gla'aki has the shape of an enormous slug covered with metallic spines that, despite their appearance, are actually organic growths. Gla'aki can also extrude tentacles with eyes at the tips, allowing him to peer from underneath the water. 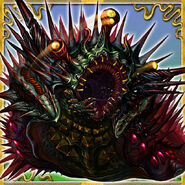