The H.P. Lovecraft Wiki
Register
Don't have an account?
Sign In
Advertisement
in: Articles including information from the "Lovecraft Circle" Myth Cycles, Article stubs, Earth-Native Species,
and 2 more
English

Likely end of the Hyperborean Age

HPL "The Horror in the Museum"

Gnoph-keh, also known as Gnoph-Hek are sharp-horned, coarse-haired beings with six long-limbs, found in Greenland and the Arctic Circle. Empowered with blizzard summoning and reducing temperatures. Connected with Rhan-Tegoth (whom they seem to worship) and possibly Ithaqua, Zhar and Lloigor (god). In early texts (such as the Book of Eibon) it is a race of vicious cannibals who were driven from Lomar by mankind and the Voormis, but in later texts it appears as a lone creature, sometimes called "the Hairy Thing" and is confused with Rhan-Tegoth. Some texts call them "reptilian" although hairy reptiles are far from common. It is now on the brink of extinction and only encountered in ones. The Gnophkeh are either creatures of air or water.

The Gnoph-keh appear in H. P. Lovecraft's early Dunsanian tales. Lin Carter incorporated then into the Mythos and they were eventually developed further by Laurence J. Cornford and John Glasby. 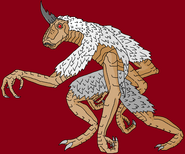 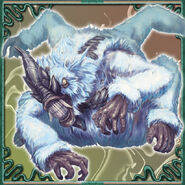 Artwork for Lindwurm's Elder Sign
This article is a stub. You can help the The H.P. Lovecraft Wiki by expanding it.
Deutsch Español
Community content is available under CC-BY-SA unless otherwise noted.
Advertisement