The H.P. Lovecraft Wiki
Register
Don't have an account?
Sign In
Advertisement
in: Articles including information from the "Lovecraft Circle" Myth Cycles, Article stubs, Earth-Native Species,
and 3 more

🔀 This is an article about the Hyperborean species of humanoids. For the non-humanoid species, see Gnoph-keh.

Gnophkehs are brutish humanoids are enemies of both the voormis and early Hyperborean human tribes.

They are humanoid cannibals described as being covered in coarse, matted hair with large protruding ears and proboscidean noses. They originally lived in Hyperborea and worshiped the Great Old One Rhan-Tegoth (CIRCLE: "The Scroll of Morloc"). But Rhan-Tegoth eventually forgot them when he entered a stone-like hibernation state. They were invaded and driven to the land of Lomar by the Tsathoggua-worshipping Voormis.

Later on they were again invaded by humans from Zobna and driven even further up north. It was there that Ithaqua, the wind-walker, appeared, to whom the Gnophkhehs transferred their allegiance. They started to harass the Voormis again as they grew in power contributing to the demise of the Voormis civilization.[1]

The Gnophkehs in Lomar were eventually destroyed when Ithaqua and Aphoom-Zhah brought about the Ice Age along with the remnants of the Voormis in Hyperborea and the human civilization in Zobna.[2] 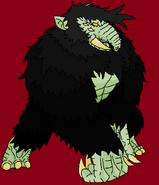