The Great Race of Yith are a race of sentient beings of extraterrestrial origin. They are capable of projecting their consciousnesses across time, inhabiting the bodies of individuals of other species and swapping their minds with their own. At some point in the distant past, they abandoned their original bodies for those of a species living on the primitive Earth, and built a flourishing civilization on the planet in their new conic bodies.

They were eventually wiped out by a race of extraterrestrial beings known as the flying polyps, but they survived by projecting their minds en masse into an insectoid race that will one day inherit the Earth after mankind.

The shape of the original forms the Great Race took on Yith are unknown; after migrating to Earth, they housed themselves in a species native to the planet. These beings resembled large cones, with a muscular foot for locomotion and four extensible arms or tentacles projecting from the apex. Two of these arms ended in claws or pincers, the third terminated in four clustered trumpet-like organs, and the fourth was topped with a spherical yellow "head" with three dark eyes, four stalked flower-like hearing organs on top, and a number of green tentacles dangling beneath. Their blood is dark green and very thick.

The Great Race spoke using their pincers to produce a series of clicks and scraping sounds, and probably also with some form of telepathy, and wrote using their head tentacles. They ate and drank using their red, trumpet-like organ. The food was described as an almost liquid, grey substance. The Great Race shared only two senses with the human: Hearing and Seeing. They also possess other senses, however, they weren't accessible to other species that switched their bodies with a Yithian.

The Great Race was sexless and they reproduced via seeds that were laid in water. However, due to their longevity, which could last several thousands of years, reproduction rarely happened.

Yithians have gained a very advanced and evolved mind, one that allowed them to project their minds across time and space. They can take over the minds of other creatures from other time periods and even other planets and universes. The mind of the creature that was taken over, is then being projected into the body of the Yithian, to the great old race. Although the difference in personality is usually noticeable and the person affected is considered repulsive to everyone (at least for humans), the Yithians can easily function in the society they project themselves into. However, to return to their original time and body, they need to build a machine, that's described as a construct of metallic poles and glass tubes.

The Yithians lived in a society that was described as being similar to a fascistic socialism, in the sense that all vital resources were evenly distributed between the individuals. Their leaders were voted into power by people who passed certain tests that qualified them to vote. Crimes were hardly ever committed, however, they were still effectively punished through a variety of means. The Yithian either had some privileges removed, was incarcerated, was executed, or was dealt a severe emotional trauma. The punishment was not dealt until the reason why the crime was committed was clearly understood.

Yithians built several countries and also inhabited some buildings that were already present from the flying polyps. The countries were rarely ever at war, if anything, civil wars occasionally happened. In spite of the fact that they barely had to fight, they had a very strong military that used weapons that could create devastating electrical charges. The military always had soldiers guarding the ruins and trapdoors where the Yithians trapped the flying polyps.

A large part of their culture was the amassing of knowledge throughout the times. When a Yithian swapped his mind with that of another creature, it will do it's best to learn as much about the society and scientific progress of the time period. Meanwhile, the mind of the creature that was taken over by the Yithian was through roughly interrogated by specifically trained individuals. Oftentimes, they could speak the language of the people they interrogated and if not, they would use machines that could recreate the language. The other minds in the bodies of the Great Old Race were considered prisoners and they were supervised to make sure that they could not harm themselves, however, the people weren't treated badly and they could work to gain more and more privileges, by writing reports about their time periods.

Though death rarely occurred, they were still being interred ceremonially. If a Yithian could not return to its original body because it was dying, the minds remained swapped and the mind in the Yithian was treated with extreme kindness.

Yithians had a traumatic relationship with the flying polyps, due to their committed unnamed but atrocious acts against the Yithians. Mentioning them was an extreme taboo and it was very hard to find any information on them. Some buildings that were created by the flying polyps were left abandoned due to some superstition among the Yithians.

The Great Race of Yith came from a planet called Yith, escaping the planet by swapping minds with a cone-shaped species on Earth that existed over 200 million years ago. Also, they went war with two other species: the Flying Polyps and the Elder Things. The Yithans were successful in the war against the flying polyps, and trapped them under Earth. On Earth, they built the city Pnakotus, located in Australia's Great Sand Desert. Pnakotus holds the Pnakotus Manuscripts, Yith's history. The Great Race of Yith saw their own downfall in the future, eventually swapping minds in the future with a beetle race existing after humanity's extinction. 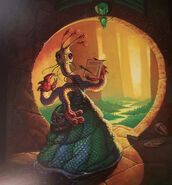 Add a photo to this gallery
Retrieved from "https://lovecraft.fandom.com/wiki/Great_Race_of_Yith?oldid=33860"
Community content is available under CC-BY-SA unless otherwise noted.