The Green God, also known as The Horror Under Warrendown, is a Great Old One created by British author Ramsey Campbell.

Residing in the underground labyrinth beneath Warrendown in the Severn Valley of England, the Green God appears as a giant statue of a head similar to those found on Easter Island; however, it is composed entirely of vegetable matter, and is capable of extruding lengthy vine-like appendages which it uses to ensnare potential victims or to offer communion to the degenerate cult of mutants who worship it.

An unusual feature of the Green God is its ability to transmute those who eat its flesh. Any who consume the vegetable matter which forms its body will slowly transform into a disgusting, rabbit-like creature, whose sole purpose is to expand the Horror's cult by offering seemingly-innocent vegetables to normal humans, in turn changing them into one of their own. 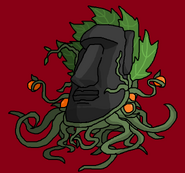 Ryuga Boumera's interpretation of the Green God's rabbit-like worshippers
Add a photo to this gallery
Retrieved from "https://lovecraft.fandom.com/wiki/Green_God?oldid=37368"
Community content is available under CC-BY-SA unless otherwise noted.