The H.P. Lovecraft Wiki
Register
Don't have an account?
Sign In
Advertisement
in: Articles needing citations, Candidates for deletion, Articles including information from the Mythos Influenced Works,
and 5 more

Hellstar Remina is a star-sized living planet that consumes planetary bodies. It has a huge mouth full of needle-like sharp teeth, a long tongue, and multiple eyes. The planet's surface is acidic, poisonous, and hostile to life. It is likely sentient and at minimum aware, being able to sense when it was being observed light years away.

A Japanese scientist with a telescope discovers a planet in the galaxy, one that consumes worlds. It turns its eye to him and upon learning Earth's location begins to head toward the planet, taking the quickest route to Earth. The living planet reaches the Solar System, eating every one of the planets on its way toward Earth.

Humanity went mad with terror and turned on the scientist who discovered the entity and his daughter Remina, whom he named the world after. In their madness, they wanted to murder Remina to appease the "angry" Hellstar. Mobs chased Remina and eventually caught her, murdering her father along the way. They then hung her on a cross, along with a bum they caught by her.

Meanwhile, astronauts are sent to Hellstar Remina, to determine if it was friendly and/or if the human race could survive its arrival. Once there, they discover that its otherworldy environment was incredibly hostile to human life. One-by-one, each astronaut was killed in extremely horrible ways. Later, Japan's leaders launched into space, attempting to survive on Hellstar Remina itself, only to die horrible deaths like the astronauts before them did.

The Hellstar licked the Earth with its tongue, causing the planet to spin like a top. Realizing that flight was now possible, the bum grabbed Remina and escaped the mob. The mob took flight and pursued the two across the world. They finally escaped the mob and took shelter within a nuclear fallout shelter, owned by the bum's family from whom he had been estranged from. Along with the two are a few other survivors, none related to each other. Hellstar Remina devoured the earth, and the only humans left were those in the fallout shelter as it floated in space. 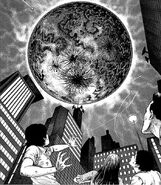 The Maw of Hellstar Remina

The Surface of Hellstar Remina

The Surface of Hellstar Remina
Community content is available under CC-BY-SA unless otherwise noted.
Advertisement