EXP: Feeders from Within

Dr Herbert West is the main character in H.P. Lovecraft’s short story "Herbert West--Reanimator" as well as the Re-Animator series of films and comics.

Herbert West is 'a small, slender, spectacled youth with delicate features, yellow hair, pale blue eyes, and a soft voice'. He is a highly intelligent, unconventional and ruthless man. (HPL: "Herbert West--Reanimator") According to more recent accounts, he has brown hair. (EXP: Re-Animator)

West is a scientist who creates a formula capable of animating unliving bodies, although his ultimate aim is to bring living creatures back to life, complete with all of their faculties.

Ron Shiflet's tale "Atonement" sees West survive the events of Lovecraft's story and set up shop to continue his experiments in small-town Illinois. Although once again dragged off by his creations, the ending is left, like the original, somewhat ambiguous.

In Peter J. Evans' novel Feeders from Within, West unexpectedly appears at Arkham Asylum and conducts an unspecified procedure on recently-admitted inmate Diana Stanley; this results in her developing a multiple-personality disorder.

In this account, he is the literary equivalent of Dr. Hector North, in a gay couple with James Montague (Providence).

In the Reanimator franchise, he is an acquaintance of Dr. Daniel Cain (Re-Animator, Bride of Re-Animator, Reanimators) and is portrayed by Jeffrey Combs in a modern setting.

"The Thing from the Trenches"

Robert M. Price's short story "The Thing from the Trenches" describes an incident during West's time serving on the Western Front with the narrator. The two unsuccessfully experiment with building a conglomerate warrior from the remains of a French and a German soldier. 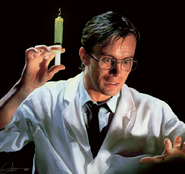 This article is a stub. You can help the The H.P. Lovecraft Wiki by expanding it.
Deutsch Español
Community content is available under CC-BY-SA unless otherwise noted.
Advertisement