Unknown, but they have possibly existed since the beginning of time

The Hounds of Tindalos

The Hounds of Tindalos are extra-dimensional predatory creatures, capable of materializing at any point in space and time to feed upon victims.

The Hounds of Tindalos are said to inhabit the "angles" of time; in contrast, humans and other earthly lifeforms live within the "curves" of time. Little is known about their appearance, as few victims survive their attacks; however, they are known to have hollow proboscises used for feeding, and are associated with a blue pus-like substance.

Hounds may appear wherever angles or corners may be found, especially those sharper than 120 degrees. When breaking through into the universe, their arrival is preceded by the appearance of smoke pouring from the corner, followed by their head and body. 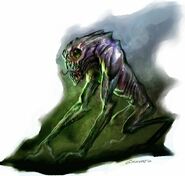 Hounds of Tindalos (Rise of Cthulhu)

Hounds of Tindalos (Conan: Adventures in an Age Undreamed Of)

Add a photo to this gallery
This article is a stub. You can help the The H.P. Lovecraft Wiki by expanding it.
Retrieved from "https://lovecraft.fandom.com/wiki/Hound_of_Tindalos?oldid=37072"
Community content is available under CC-BY-SA unless otherwise noted.